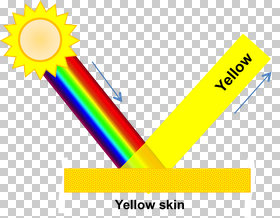 Yellow skin appears that color because it scatters the yellow portion of the light spectrum. 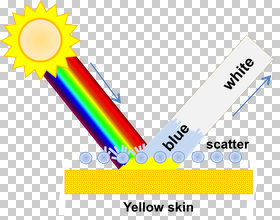 When a cosmetics preparation containing nano-/micro particles that scatter the blue portion of the spectrum is applied to the skin, it appears whiter because the scattered yellow and blue light mix.

How someone perceives color is determined by how the item they are looking at scatters and emits light. In August, three City College of New York physicists affiliated with the Institute for Ultrafast Spectroscopy and Lasers (IUSL) were awarded a patent for a method for changing perception of skin tone by applying quantum and optical principles to cosmetic preparations.

“If you understand the physical properties of light you can use those properties to change color perception. We all know red, green and blue give white,” said Dr. Alfano, CUNY distinguished professor of science and engineering. For example, yellowish skin could appear white if covered with a preparation enabling it to scatter blue light as well as yellow light.

According to the patent abstract, the main application of the method will be to change the appearance of facial color from red, blue or yellow to white. Often, these appearances result from medical conditions. For example, cyanosis, deprivation of oxygen to tissue near the skin, can cause skin to appear blue. Also, many people develop rosacea, which causes skin to redden, as they age.

Scattering does the trick.

“By selecting the right size and materials of particles compounded in cosmetic preparations and applying the preparations to the skin, the scattering and/or emission from micro- and nan-particles can provide a complimentary color or in proximity to that complementary color of the skin color,” the abstract states. “The mixture of the color provided by the particles and the reflect color from the skin will whiten the skin or make inconspicuous the hyperchromic (more light absorbing) portion of the skin.”

The method can be applied to other products in which particles are applied to a surface or blended into a material, including paint and colored glass.