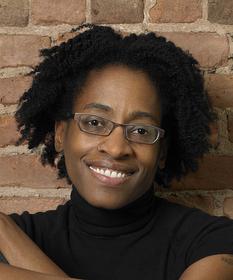 Jacqueline Woodson, an award-winning author of more than 30 books for children and young adults, is this year’s recipient of The City College of New York’s Langston Hughes Medal. She receives the award on Nov. 20 at City College’s 36th Langston Hughes Festival. The award ceremony, in the Marian Anderson Theatre at Aaron Davis Hall on the college campus, starts at 6 p.m.

“Like Langston Hughes, Woodson is a prolific writer in many genres including fiction, poetry, plays and opera,” said Retha Powers, director of the Langston Hughes Festival. “She also shares with Hughes a wide readership among young readers and is taught in schools all over the country.”

As a Langston Hughes medalist, Woodson joins a list of other literary luminaries, including   James Baldwin, Toni Morrison, Maya Angelou, and Walter Mosley, who have received the honor.

Before the award ceremony, Woodson will participate in a “Young Readers Q&A” from 11 a.m. to noon with more than 400 students, k-12, mostly from the Harlem community, in Aaron Davis Hall.

This will be followed by a symposium entitled “Holding up Mirrors and Windows: A Symposium on the work of Jacqueline Woodson,” at 3 p.m. It features authors Bryan Collier, Rita Williams Garcia, Jason Reynolds and biographer Lois T. Stover discussing the importance and influence of Woodson's books.

The awards ceremony will be emceed by CCNY alumna and CBS radio reporter Jayne Tillman Irving ’69. It will include a conversation with journalist Hilton Als of “The New Yorker” and a special performance by folk and blues musician Toshi Reagon.