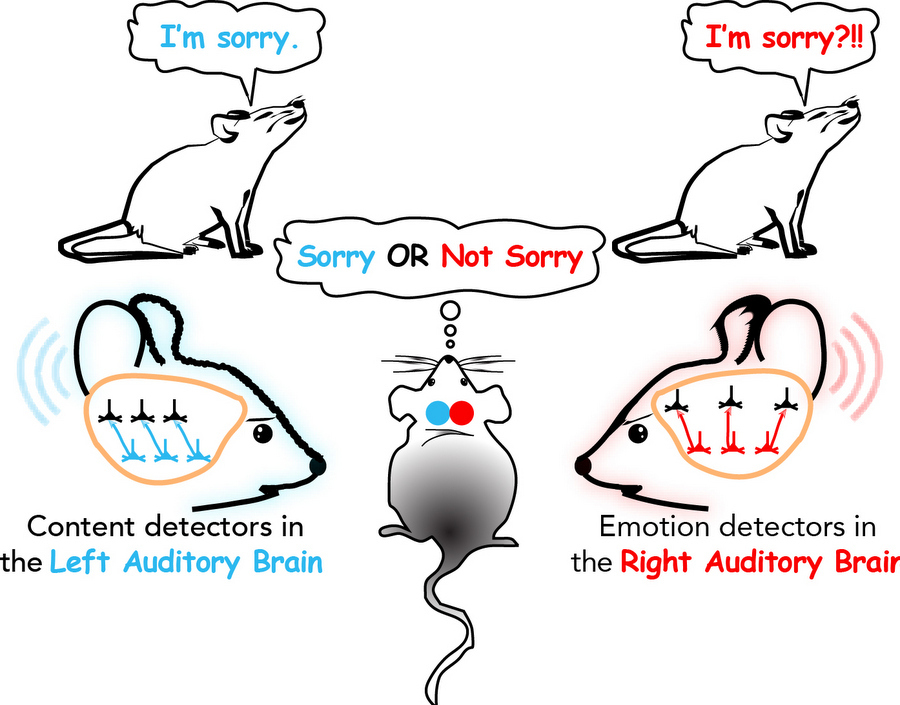 Researchers are closer to understanding the mechanisms behind the division of labor between the two hemispheres of the brain for processing speech, thanks to a new study from CCNY scientist Hysell Oviedo’s lab. These findings could be useful in sorting out the potential miswiring underlying neurodevelopment communication disorders like autism and schizophrenia. Graphic credit: H. Lebreault.

City College of New York-led researchers have published a breakthrough in understanding previously unknown inner workings related to the lateralization of speech processing in the brain. Their study, headed by biologist Hysell V. Oviedo of CCNY’s Division of Science and published in the journal “Nature Communications,” could shine a light on miswiring of brain circuits in neurodevelopmental communication disorders.

“The lateralization of language processing in the auditory cortical areas of the brain has been known for more than 150 years, but the function, neural mechanisms, and development of this hemispheric specialization is still   unknown,” said Oviedo, who’s also affiliated with the Graduate Center, CUNY.

Lateralization is referred to as the specialization of functions in the brain, commonly attributed to its left hemisphere and right hemisphere.

“This division of labor between the left and right auditory cortices in processing social communication is not unique to humans but is widespread in many species including mice. Using the mouse as an animal model, our study is the first to show that there are significant differences in the wiring diagram of the language centers in the brain that could underlie their distinct speech processing capabilities,” added Oviedo.

On possible outcomes of their research, Oviedo noted that communication deficits are the most common disabilities in children, affecting 8-12% of preschoolers.

“Although the causes of communication deficits vary, the underlying pathological mechanism routinely involves miswiring of the connections between neurons in the language centers of the brain.

“Our discovery of the wiring diagram relevant to communicative functions provides the opportunity to use the mouse as a model to study the molecular phenotypes that shape the development of vocalization processing and how it goes awry in neurodevelopmental communication disorders,” she concluded.