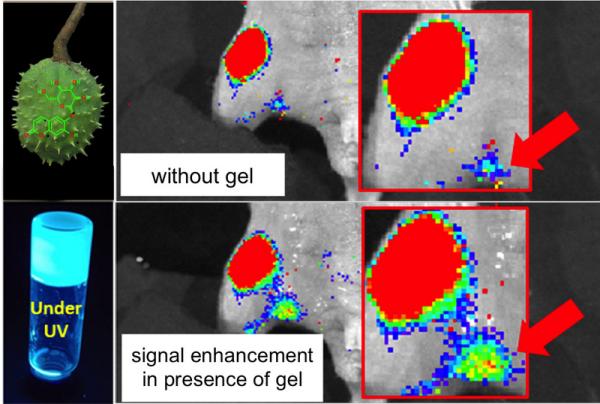 Research at The City College of New York shows that cancer imaging can be simplified by a photonic process utilizing molecules derived from horse chestnuts. The study with potential to better detect the presence of cancer is led by George John, professor in City College’s Division of Science, in collaboration with Jan Grimm, a physician scientist at   Sloan Kettering Institute who is also affiliated with Memorial Sloan Kettering Cancer Center and Weill Cornell Medical College.

The team has developed a radiation responsive esculin-derived molecular gel, that is both scintillating and fluorescent, to enhance the optical photon output in image mapping for cancer imaging.

Esculin, or Æsculin, is a coumarin glucoside that naturally occurs in the horse chestnut, a plant extract. It is beneficial to circulatory health.

A challenge currently in cancer imaging is that optical imaging of radiotracers through Cerenkov light (the Grimm lab is one of the leading labs in this field) often produces light that is typically low in intensity and blue-weighted (greatly scattered and absorbed in vivo). It is therefore imperative to increase or shift the photon flux for improved detection.

The gel has been developed to address this challenge.

“The possibility of developing a topical application from the gel makes this innovation an attractive potential improvement to current techniques of cancer imaging with Cerenkov light,” added Grimm.

A Fellow of Britain’s Royal Society of Chemistry, John’s research is rooted in the idea that innovation can be inspired by nature to develop economical and green technologies for a sustainable future.

The study appears in the journal “ACS Appl Mater Interfaces.”