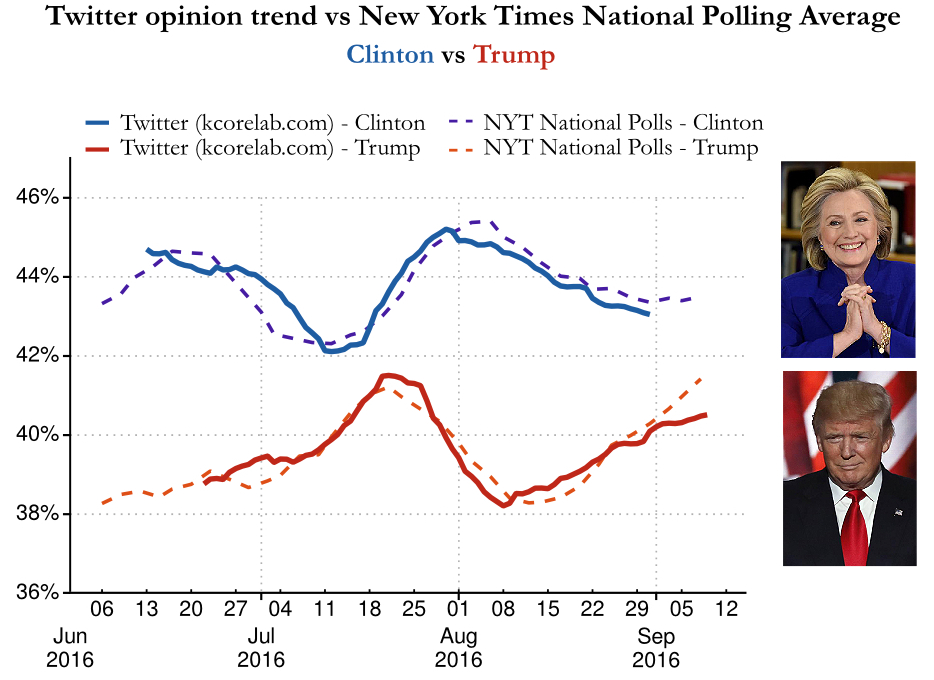 As the countdown continues to the Presidential election, new analytical tools by physicists at The City College of New York promise a quicker and remarkably accurate method of predicting election trends with Twitter.

“Forecasting opinion trends from real-time social media is the long-standing goal of modern-day big-data analytics,” said Makse, a Fellow of the American Physical Society. “Despite its importance, there has been no conclusive scientific evidence so far that social media activity can capture the opinion of the general population at large.”

However, by using a large-scale dataset of 73 million tweets collected from June 1 to September 1, 2016, Makse and his associates are able to investigate the temporal social networks formed by the interactions among Twitter users.

“We infer the support of each user to the presidential candidates and show that the resulting Twitter trends follow the New York Times National Polling Average, which represents an aggregate of hundreds of independent traditional polls, with remarkable accuracy (r = 0.9),” Makse said.  More importantly, for the CCNY team, the Twitter opinion trend forecasts the aggregated Times polls by 6 to 15 days, showing that Twitter can be an early warning signal of global opinion trends at the national level.

“Our analytics, which are available at kcorelab.com, unleash the power of Twitter to predict social opinion trends from elections, brands to political movements. Our results suggest that the multi-billion public opinion polling industry could be replaced by Twitter analytics performed practically for free,” concluded Makse.

Click here for an abstract of the research, “Predicting election trends with Twitter: Hillary Clinton vs Donald Trump.”