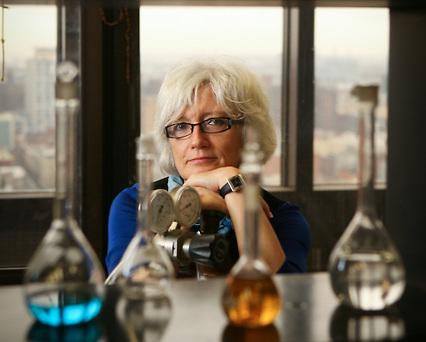 From the lab of City College of New York chemical engineer and Fulbright Scholar Teresa J. Bandosz comes a groundbreaking development with the potential to thwart chemical warfare agents: smart textiles with the ability to rapidly detect and neutralize nerve gas.

The fabric consists of a cotton support modified with Cu-BTC MOF/oxidized graphitic carbon nitride composites. The latter were developed in the lab previously and tested as nerve agent detoxification media and colorimetric detectors.

Combining Cu-BTC and g-C3N4-ox resulted in a nanocomposite (MOFgCNox) of heterogeneous porosity and chemistry. Upon the deposition of MOFgCNox onto cotton textiles, a stable fabric with supreme photocatalytic detoxification ability towards the nerve gas surrogate, dimethyl chlorophosphate, was obtained.

The detoxification process was accompanied by a visible and gradual color change, which Bandosz said can be used for the selective detection of chemical warfare agents and for monitoring their penetration inside a protective layer.

“These smart textiles adsorbed almost 7g of CWA surrogate/its detoxification products per gram of Cu. The superior performance was linked to the high dispersion of the MOF crystals on the fibers, and a specific texture promoting the availability of the active copper centers,” said Bandosz, who is seeking funding for additional research.

Bandosz received a 2016-2017 Fulbright Senior Scholar Award for her pioneering work. She did research at the University of Malaga in Spain to help alleviate global warming and solve energy problems.