Could a NOSH-Aspirin-a-Day Keep Cancer Away? | The City College of New York Skip to main content

Could a NOSH-Aspirin-a-Day Keep Cancer Away?

< Home / News / Could a NOSH-Aspirin-a-Day Keep Cancer Away? 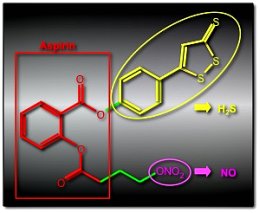 NOSH-aspirin: the scaffold of aspirin (red) bears arms that produce nitric acid (NO, purple) and hydrogen sulfide (H2S, yellow), which boost the safety and potency of the cancer-fighter.

The humble aspirin may soon have a new role. Scientists from The City College of New York have developed a new aspirin compound that has great promise to be not only an extremely potent cancer-fighter, but even safer than the classic medicine cabinet staple.

The new designer aspirin curbed the growth of 11 different types of human cancer cells in culture without harming normal cells, reported a team from the Sophie Davis School of Biomedical Education of The City College of New York in a paper published this month in the journal ACS Medicinal Chemistry Letters. The cancers controlled included colon, pancreatic, lung, prostate, breast, and leukemia. “The key components of this new compound are that it is very, very potent and yet it has minimal toxicity to the cells,” said Associate Professor Khosrow Kashfi, the principal investigator.

The aspirin compound also shrank human colon cancer tumors by 85 percent in live animals, again without adverse effects, according to a second paper in press by the City College researchers and colleague Kenneth Olson of Indiana University School of Medicine, South Bend. Their results will appear in the journal Biochemical and Biophysical Research Communications, now available online.  “If what we have seen in animals can be translated to humans,” said Professor Kashfi, “it could be used in conjunction with other drugs to shrink tumors before chemotherapy or surgery.”

Long the go-to drug for minor aches and pains, aspirin and other so-called non-steroidal anti-inflammatory drugs (NSAIDs) such as ibuprofen and naproxen, are known primarily for their ability to calm inflammation. Studies in the 1980’s resolved a decades-old debate on the utility of a daily dose of aspirin to cut the risk of heart attack and stroke.

More recent studies tracking regular use of the drug and other NSAIDs demonstrated their remarkable ability to inhibit the growth of cancer. “There’s a lot of data on aspirin showing that when taken on a regular basis, on average it reduces the risk of development of colon cancer by about 50% compared to nonusers,” noted Professor Kashfi.

The fly in the ointment has been that prolonged use of aspirin posed its own dangers: side effects ranging from bleeding ulcers to kidney failure. To resolve this, the researchers created a hybrid of two earlier formulations, which they have called “NOSH-aspirin.” They used the aspirin as a scaffold to support two molecules that have been shown to increase the drug’s safety and potency.

One arm of the hybrid aspirin releases nitric oxide (NO), which helps protect the stomach lining. The other releases hydrogen sulfide (H2S), which the researchers have previously shown enhances aspirin’s cancer-fighting ability. The researchers suspected that the hybrid would be more effective than either of the two components alone to boost aspirin’s safety and power against cancer.

“The hybrid is more potent – and it is more potent by orders of magnitude – compared to aspirin,” said Kashfi. Only 24 hours after treating a culture of cancer cells, the NOSH-aspirin demonstrated 100,000 times greater potency than aspirin alone. “At 72 hours it is about 250,000 times more potent in an in-vitro cell culture against human colon cancer,” Kashfi added. “So you need a lower amount to get the same result.”

The effect of the hybrid was also far greater than the sum of its parts. Its potency was as much as 15,000 times greater than existing NO-aspirins and 80-fold more than those that incorporate H2S. The upshot is that a drug based on this hybrid would require lower doses to be effective, minimizing or potentially eliminating its side effects.

In the second study, when mice bearing human colon cancer tumors on their flanks were given oral NOSH-aspirin, the compound caused cancer cells to self-destruct, inhibited the proliferation of the cells and significantly reduced tumor growth without any signs of toxicity in the mice.

The stage is set for the development of a drug based on NOSH-aspirin.  Kashfi noted that any working therapy for humans is years away, but the next step would be toxicity testing, and then clinical trials.

Dr. Ravinder Kodela and Dr. Mitali Chattopadhyay are members of Professor Kashfi’s lab at Sophie Davis School of Biomedical Education and co-authors on both papers. These studies were funded by The National Cancer Institute through a subcontract from ThermoFisher, and also by the National Science Foundation.

Professor Kashfi and his colleagues will present these findings at the annual meeting of the American Association for Cancer Research in Chicago, March 31st - April 4th.