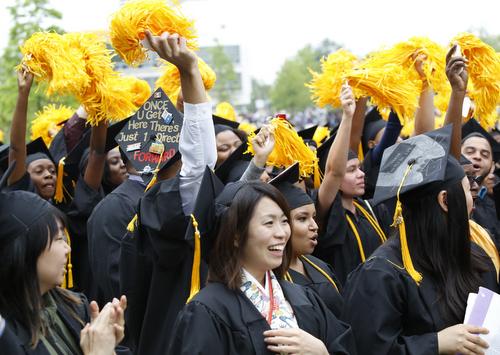 Class of 2016 students celebrate commencement at CCNY. The college is ranked in the top 1.2% of institutions in the world.

The City College of New York, whose student population hails from more than 150 nations,   ranks in the top 1.2 % of institutions worldwide in the 2016 Center for World University Rankings.

City College ranked # 294 among the more than 25,000 degree-granting institutions of higher education worldwide according to the CWUR, which conducts the largest academic ranking of global universities.

CWUR uses several indicators to rank the world's top 1,000 universities. They include:

About the Center for World University Rankings
The CWUR publishes the only global university ranking that measures the quality of education and training of students as well as the prestige of the faculty members and the quality of their research without relying on surveys and university data submissions.The CWUR ranking started out as a project in Jeddah, Saudi Arabia in 2012 with the aim of ranking the top 100 global universities. Since 2014, the CWUR ranking expanded to list the top 1000 out of 25,000+ degree-granting institutions of higher education worldwide, making it the largest academic ranking of global universities.