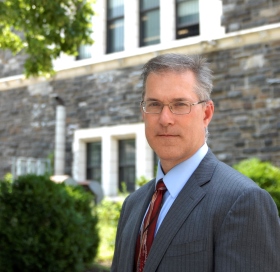 Dr. Vincent Boudreau is the next president of The City College of New York, CUNY Chancellor James B. Milliken announced today.

Boudreau has served as Interim President of CCNY since November of 2016. Prior to that appointment, Boudreau was inaugural dean of the Colin Powell School for Civic and Global Leadership at City College since 2013. He was previously director of the Colin L. Powell Center for Leadership and Service from 2002 through 2013.

“In some ways, the idea of a truly inclusive public education system as an engine of our democracy began on this campus 170 years ago,” said Boudreau. “Shepherding that legacy into the future brings significant challenges that will require the mobilization of the talents and affections of people on our campus and in our communities. I’m confident that the founding mission of CCNY is alive on campus today and I am both honored and awed at the prospect of stewarding that mission.”

In his announcement, Milliken said, “It has become evident to me that Dr. Boudreau not only has the experience, academic capabilities and leadership skills to be a highly successful president, he also has demonstrated this to many of the stakeholders of the College, including the college’s proud and committed alumni, donors and community leaders. In the process, he has won their trust and confidence. I am delighted and encouraged that our search has brought us back home to a candidate who has established over decades his commitment to CCNY.”

CUNY Board Chairperson William C. Thompson, Jr. said in a release, “The Board of Trustees is thrilled to have found a home-grown candidate who so ably meets the central charge stated in our search for a new president of The City College of New York: ‘a leader who will chart the college’s course – and steward its core commitments to access and excellence – into the future.’ Vincent Boudreau, who already has done so much to shape today’s City College, is well equipped for the challenge. I want to thank Vice Chairperson Barry F. Schwartz, who led the national search, and the other Board members who gave so much of their time and energy.”

General Colin L. Powell (USA, Ret.), Board of Visitors Chairman at the Colin Powell School, commented:  "I am delighted to learn Vince Boudreau will be the next president of CCNY. I have worked with him for the past twelve years as, under his leadership, a modest Colin Powell Center has grown into the Colin Powell School, with one-third of the CCNY student body graduating from our departments each year. He is an academic, a manager and a leader. Above all, he is totally committed to our students, making sure they get a quality education and that they graduate."

He is a professor of political science at CCNY and a member of the City University of New York graduate faculty.

A specialist in the politics of social movements, particularly in Southeast Asia, his latest book is “Resisting Dictatorship: Repression and Protest in Southeast Asia” (Cambridge University Press).