“Flying into the Hurricane” 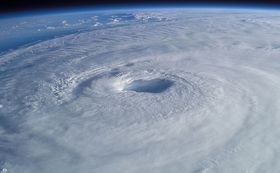 Over the past two semesters during his sabbatical, City College of New York Earth and Atmospheric Science Associate Professor Z. Johnny Luo spent hundreds of hours on scientific flights studying cloud dynamics. On Thursday, October 30, photo images from his airborne missions go on display in the exhibit “Flying into the Hurricane: Science in Action” in the Marshak Café at CCNY. It runs through fall 2015.

Professor Luo’s first flight last fall took him through Hurricane Ingrid over the Gulf of Mexico in a NASA plane. He was a science leader of a NASA mission looking at how convective clouds help process and transport air pollutants. The research continued early this year in the skies over the west Pacific Ocean.

“The idea is to motivate students to study science. It's no longer nerdy stuff but full of action, adventure and excitement,” he explained the purpose of the exhibit.