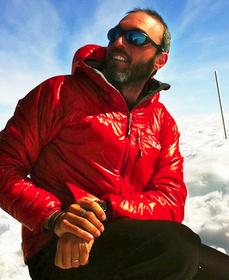 Dr. Marco Tedesco, head of CCNY's Cryospheric Processes Laboratory, spoke about the darkening of the Greenland Ice Sheet at a press conference in Vienna.

Tedesco told a press conference in the Austrian capital that the projection is based on a model that only accounts for the effects of warming on snow grain size and melting.

An associate professor in City College’s Division of Science and head of its Cryospheric Processes Laboratory that he founded, Tedesco is an authority on the Greenland Ice Sheet where he has conducted annual research.

He noted that a darkening of the Greenland Ice Sheet associated with increasing temperatures and enhanced melting occurred between 1996 and 2012. It was promoted by:

Tedesco, however, added that his research had not found any evidence that points to either increased atmospheric deposition of impurities or to the number of fires over Eurasia and North America as being factors.

The EGU General Assembly 2015 brings together some 12,000 geoscientists from all over the world into one meeting covering all disciplines of the Earth, planetary and space sciences.