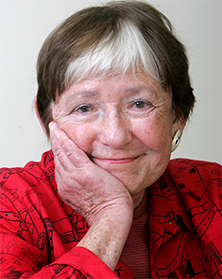 Myriam Sarachik is the recipient of the 2020 American Physical Society Medal for Exceptional Achievement in Research.

Myriam Sarachik, distinguished professor in the Division of Science at The City College of New York, is the recipient of the 2020 American Physical Society Medal for Exceptional Achievement in Research. The medal is the society’s largest prize, recognizing the achievements of researchers from across all fields of physics.

The honor is in recognition of Sarachik’s “fundamental contributions to the physics of electronic transport in solids and molecular magnetism,” and it will be received along with a $50,000 prize at a ceremony on January 30, 2020 in Washington, D.C.

Sarachik has investigated superconductors, disordered metallic alloys, metal-insulator transitions in doped semiconductors, hopping transport in solids, strongly interacting electrons in two dimensions and spin tunneling in nanomagnets. In addition to her research, she has served as a member and chair of the Solid State Sciences Committee of the National Research Council, the Human Rights Committee of the New York Academy of Sciences and the Board of the Committee of Concerned Scientists.

She earned her B.A. degree from Barnard College, and her M.S. and Ph.D. degrees in physics from Columbia University. Following research associate positions at IBM Watson Laboratories at Columbia University and at Bell Laboratories, she joined the faculty of City College of the City University of New York as an Assistant Professor of Physics in 1964 and was promoted through the ranks to Distinguished Professor in 1995.

She has also received the 1995 New York City Mayor's Award for Excellence in Science and Technology and a 2004 Sloan Public Service Award from the Fund for the City of New York. She was awarded the 2005 APS Oliver E. Buckley Prize in Condensed Matter Physics, and was named the 2005 L’Oreal/UNESCO for women in science Laureate for North America.

About The City College of New York
Since 1847, The City College of New York has provided a high quality and affordable education to generations of New Yorkers in a wide variety of disciplines. CCNY embraces its role at the forefront of social change. It is ranked #1 by the Harvard-based Opportunity Insights out of 369 selective public colleges in the United States on the overall mobility index. This measure reflects both access and outcomes, representing the likelihood that a student at CCNY can move up two or more income quintiles. In addition, the Center for World University Rankings places CCNY in the top 1.2% of universities worldwide in terms of academic excellence. More than 16,000 students pursue undergraduate and graduate degrees in eight professional schools and divisions, driven by significant funded research, creativity and scholarship. CCNY is as diverse, dynamic and visionary as New York City itself.  View CCNY Media Kit