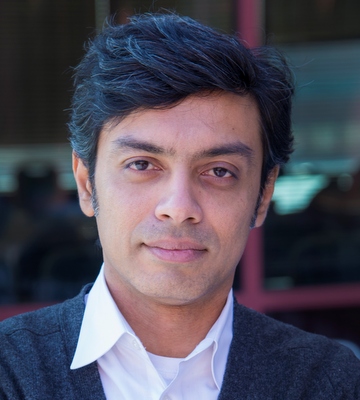 CCNY physicist Vinod Menon has been elected a Fellow Member of The Optical Society, the foremost professional association in optics and photonics, globally.

Pioneering City College of New York physicist Vinod Menon can add to his burgeoning honors with his election as a Fellow Member of The Optical Society (OSA), the foremost professional association in optics and photonics, globally. Fellows are selected based on several factors, including contributions to education, research, engineering, business and the community.

Menon, whose research in light-matter interaction at the nanoscale level has advanced the field of photonics, is one of 94 new members internationally in OSA’s 2020 Fellows Class. It includes scientists from universities and research centers in North America, Europe, Asia and Australia.

Being named an OSA Fellow is a singular honor and indicates a history of achievement in optics and photonics, and a reputation for service to OSA and our field,” said OSA President Ursula Gibson.

In 2018, Menon was one of six scientists globally bestowed with IEEE Photonics Society Distinguished Lectureships. The accolade honors excellent speakers who have made technical contributions of high quality and enhanced the technical programs of Photonics Society chapters.

Earlier this fall, Menon’s research team in CCNY’s Division of Science received a $2 million National Science Foundation grant for a four-year research project to develop chip-scale quantum emulators. The outcome could include the ability to solve diverse computationally intractable problems from protein folding and neural networks to the dynamics of financial markets.

About The Optical Society
Founded in 1916, The Optical Society (OSA) is the leading professional organization for scientists, engineers, students and business leaders who fuel discoveries, shape real-life applications and accelerate achievements in the science of light. Through world-renowned publications, meetings and membership initiatives, OSA provides quality research, inspired interactions and dedicated resources for its extensive global network of optics and photonics experts.