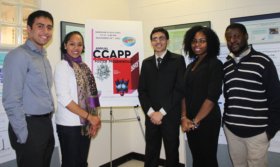 The CCNY STEM students honored for their research by the ABRCMS were, from left to right, Ashraf Elzanie, Tai-Danae Bradley, Syed Haider, Keaira Dupuy and Oluwaniyi Mabayoje.

They were selected from a field of more than 1,500 participants from colleges and universities across the country.

"This is huge. You can imagine the kind of competition they were going up against," said Professor Millicent Roth, assistant to the dean of science for undergraduate programs. "We are calling them The Group of Five."

Students from 12 disciplines in the biomedical sciences, behavioral sciences and mathematics were judged on their poster and oral presentations during the four-day conference. Those with the highest scores for each academic level in each discipline were presented with awards at the final banquet.

Ashraf and Keaira conducted their research through a partnership with the Sophie Davis School of Biomedical Education and the Memorial Sloan-Kettering Cancer Center, the CCNY-MSKCC Partnership for Cancer Research, directed by CCNY Professor of Biology Karen Hubbard.

Three of the City College winners are participants in the City College Academy for Professional Preparation (CCAPP), the Division of Science's program to support student research, which Professor Roth directs. CCAPP students present research posters on campus. The organization showcased the posters for all CCAPP students' research projects at an annual at the end of semester event in the Marshak Science Building Gallery.

"It's our 16th year and every year I see more students' posters," said Dr. Chris Li, acting dean of science. "They're going to be going into the elevators next year." The CCAPP posters describe the students' research projects, the theory on which each is based, and how the research applies to the theory. Below are the winning ABRCMS students' stories:

Oluwaniyi, known to his friends as "Niyi", immigrated to this country with his parents from Ibadan, Nigeria, in 2006 and lives in the Bronx. "I started science because I was expected to do it, but now I just love it," he said, a big smile breaking across his face.

The goal of Oluwaniyi's project was to increase the efficiency with which a metal oxide called cobalt hydroxide can scrub hydrogen sulfide, a toxic pollutant, from the air when it is at room temperature, and then to investigate how it did so. Cobalt hydroxide normally requires very high temperatures to work. Oluwaniyi treated the material with varying amounts of graphite oxide and was able to increase its efficiency at room temperature by 400 percent. He plans to continue with his passion for research and will apply to graduate programs in renewable energy or a similar field.

Tai-Danae grew up in Richmond, Va., and describes herself as "not the typical math student." Not a fan of math and science in high school, she discovered her love of math in her sophomore year at City College. After a busy season playing on CCNY's women's basketball team, she sat in on a summer course to review what she had missed in class.

For the first time, she was able to listen without taking notes and, to her amazement, she began seeing layers of meaning in the theory beyond simple computation. "Math is not just numbers – some of this is mind blowing," she remembers thinking.

In keeping with her first awakening to math, her research project has to do with pure math and number theory.

She explored the pattern of a distribution of numbers called Gaussian Integers. She found that the structure of this previously un-described distribution hid a well-known formula that describes the distribution of prime numbers, demonstrating for the first time that the two are related. Tai-Danae will apply for graduate programs in theoretical mathematics.

Syed, a native of Pakistan, immigrated to the US in 2007. He became interested in medicine during visits to a neurologist with his grandmother and sees research as a way he can help others and make a difference in their lives.

He presented posters on two different research topics at the CCAPP event and was awarded a travel grant and the opportunity to give an oral presentation at ABRCMS. In the research for which he won recognition, he and his mentor investigated the effect of explosive blasts on the brain.

The blasts essentially punch holes in a protective shield called the blood-brain barrier, which prevents toxins and infectious agents in the blood from entering the fluid around the brain. Syed was able to determine the quantity and size of the neurotoxins that can pass through after the damage.

In another project at CCNY with Dr. Itzhak Mano, Syed is helping to identify the steps of the genetic process that protect the brain from further damage following a stroke. He plans to continue with his dual interests in medicine and research, saying: "As long as I'm doing something for patients, that's my goal."

Ashraf's father immigrated from Egypt and his mother from Honduras. He grew up in Staten Island. Ashraf lost an aunt to cancer, which inspired him to pursue medicine. He said of his parents' support: "They put me in a place where they said, 'whatever your passion is, you can go for it.' "

He and his mentor used cancer imaging and special fluorescent tags to target tumors for radiation or chemotherapy to help reduce the indiscriminate damage to normal tissue caused by large-dose chemotherapy. They used glowing green antibodies that flag tumor tissue and then clear quickly from the blood. "What I really enjoy is learning about the mechanisms of things, and I apply this to patient care. This is my love for science being translated into medicine," he said.

Ashraf enjoys patient contact even more than research and is considering a clinical internship next.

Keaira's family is from Haiti, where the Neem tree, a relative of mahogany, grows in abundance. Extracts from the tree are used in folk medicine to treat cancer and other illnesses around the world. Keaira made a critical analysis of the medical literature about Neem in order to provide solid information to physicians and patients about Neem's value and efficacy.

She found promising clinical results showing that components of the tree can kill pancreatic and cervical cancer cells in vitro and showed some potential in human trials as an antiviral agent against the symptoms of HIV-AIDS. "It has shown me my interest in research," said Keaira. "I do want to continue – you get to make a difference."