DNA of 200 NYC Students Reveals a Microcosm of the World 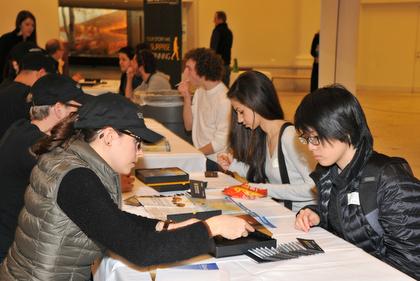 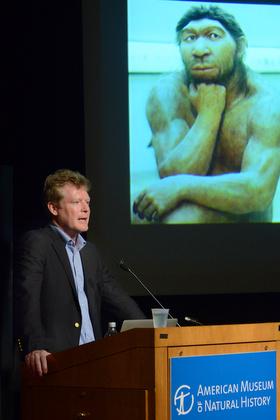 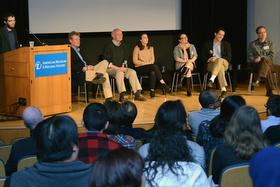 City College of New York Assistant Professor of Biology Mike Hickerson (at podium), who directed the Student Ancestry Project, leads a panel discussion and Q&A session with prominent population geneticists about the findings and their implications. © AMNH

The 200 college students who provided DNA samples in February for the New York City Student Ancestry Project, led by The City College of New York, today learned the results of an analysis of their genetic profile at an event held at the American Museum of Natural History (AMNH). The students, from eight institutions in the New York metropolitan area, had their samples analyzed by National Geographic’s Genographic Project.

Spencer Wells, National Geographic explorer-in-residence and director of the Genographic Project, and Mike Hickerson, assistant professor of biology, The City College of New York/Graduate Center-CUNY, presented the results to the student participants.

“The New York City Student Ancestry Project combines classroom learning with citizen science,” said Dr. Wells. “The more people who participate, the more we will learn about new or rare genetic lineages and their present-day distributions. We also hope to increase representation from groups that may not be included among the current participants. Ultimately, we're trying to tell the human story, and that has a multitude of fascinating chapters.”

“The goal of the New York City Student Ancestry Project is to directly involve students with their own DNA to learn how human history, ancestry and evolution can be better understood through genetics,” said Professor Hickerson. “With the growth of personal genomics and public databases, these sorts of public programs are critical in light of the potential for misunderstanding and misuse of genetic information.”

After the presentation, a panel of prominent population geneticists discussed the significance of personal genomics data and genomics testing in general.

The Student Ancestry Project is linked to Professor Hickerson’s National Science Foundation-supported research to develop computational models that use DNA evidence to reconstruct how communities of species have responded to climate change.

His aim is to use thousands of genes from many species at once to test scenarios of how members of ecological communities can synchronously or idiosyncratically expand, contract, move and go extinct as climate change modifies the habitat.

The event is part of AMNH’s ongoing interest in public education about the impact of the relatively new science of genome mapping. Under its Sackler Institute for Comparative Genomics, the Museum supports the work of about 75 researchers, including Dr. Rob DeSalle, with projects ranging from conservation genetics to the diversity of malaria parasites in non-human hosts.

The Genographic Project is a multiyear global initiative that is gathering and analyzing the world’s largest collection of anthropological DNA samples in the hope it will capture an invaluable genetic snapshot of humanity. More than 600,000 people from 130 countries have participated in the project.

About the Genographic Project
The Genographic Project is a multiyear global initiative that is gathering and analyzing the world’s largest collection of anthropological DNA samples in the hope it will capture an invaluable genetic snapshot of humanity. Members of the public can take part in this real-time research initiative with the Geno 2.0 Ancestry Kit.www.genographic.com

About the American Museum of Natural History
The American Museum of Natural History, founded in 1869, is one of the world’s preeminent scientific, educational, and cultural institutions. The Museum encompasses 45 permanent exhibition halls, including the Rose Center for Earth and Space and the Hayden Planetarium, as well as galleries for temporary exhibitions. Visit amnh.org for more information.