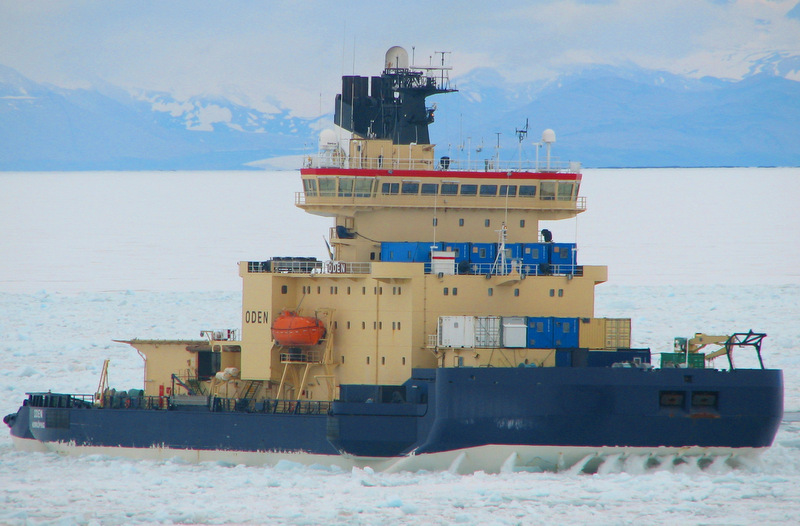 The Swedish Icebreaker Oden, aboard which CCNY student researchers participated in an Arctic expedition.

Aboard the Icebreaker Oden, a Swedish vessel on an Arctic expedition, a multidisciplinary group of scientists, filmmakers and students, including three City College of New York undergraduates, made a dismaying discovery in the Canadian Arctic Archipelago.  “Microplastics, a lot of them,” said Krystian Kopka, junior in CCNY’s Grove School of Engineering.

The U.S. National Oceanic and Atmospheric Administration (NOAA) defines microplastics as any type of plastic fragment that is less than 5 mm in length.

Resistant to biodegradation, microplastics can break down to even smaller pieces that can cross biological barriers and cause tissue damage. They can be harmful to living organisms, including animals, aquatic life and, potentially, humans.

“Microplastics are bad for the environment. They are destroying the habitat and ecosystem of the Arctic,” said Kopka, pointing to the seabirds, polar bears and beluga whales they saw.

Kopka and his CCNY colleagues -- Michael DiGilio, a senior majoring in environmental earth system science, and geology senior Yoana Boleaga – helped collect the ice core samples where a variety of plastics – of different colors, shapes, and sizes, were found.

As an emerging field of study, not a lot is known about microplastics and the extent of their impact. NOAA has developed standardized field methods for collecting sediment, sand, and surface-water microplastic samples for testing. Although plastic has been previously reported in sea ice collected from the Central Arctic, Beaufort Gyre and the Eurasian Basin, this was the first time that plastics were found in ice from the Northwest Passage Project

“I never knew how cool research was,” observed DiGilio, whose companions included 15 other students from the University of Illinois at Chicago, Virginia Commonwealth University and Florida International University.

All the students on the expedition, who were accompanied by scientists and researchers, were selected after a competitive process and a series of interviews conducted by the University of Rhode Island.

Kopka, DiGilio and Boleaga are mentored by Maria Tzortziou, physicist and oceanographer in CCNY’s Division of Science. Tzortziou has been conducting research exploring the changing biogeochemical fluxes and ecology in the coastal Arctic Ocean. She is the CCNY liaison on the Northwest Passage Project.