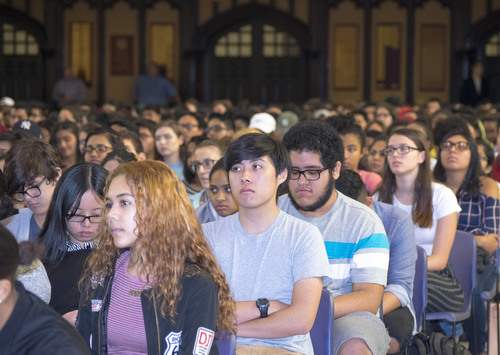 With a student population representing 89.6% of the world’s 193 sovereign states, The City College of New York continues to rank among the most diverse academic institutions in America.  The Wall Street Journal/Times Higher Education 2018 College Rankings place City College at joint #8 for environment with three other schools.

The rankings’ environment score encompasses several measures to gauge a school’s inclusiveness. They range from the percentage of first-time college graduates and Pell Grant recipients to the diversity of a school’s students and staff and the percentage of international students.

The top eight school overall are:

Drawing students from their immediate areas and appealing to low-income and first-generation college students, state-backed institutions in major cities seem to be most successful at bringing in a racially and socioeconomically diverse student body.

Hispanics, at 31.5 percent, are the largest ethnic student group at CCNY. Asian Americans (27 percent), Whites (21.3 percent) and African-Americans (19.7 percent) are the other major ethnic groups.

For CCNY, this latest recognition follows the U.S. News & World Report 2018 rankings that named CCNY as one of the top 100 Best Regional Universities in the North and a Top Public School in the North.