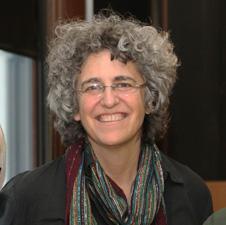 Andrea Weiss is an internationally acclaimed documentary filmmaker, editor and nonfiction writer. She wrote, directed and edited the documentary/fiction feature, Escape To Life, which premiered in the Berlin and Rotterdam Film Festivals, followed by a European theatrical and television release. Other film credits include Seed of Sarah, Paris Was A Woman, International Sweethearts Of Rhythm, Tiny & Ruby, A Bit of Scarlet, and Before Stonewall (for which she won an Emmy Award). Her production company, Jezebel Productions, has been honored with restrospective screenings in London, Hamburg, Zurich and Berlin.

Weiss' book, Paris Was A Woman, was re-issued in 2013 and has been translated into French, German, Spanish, Korean, Croation, and Japanese. In The Shadow Of The Magic Mountain (University of Chicago Press, 2008) is winner of the Publishing Triangle Award, and was translated into German and Swedish. Weiss has received fellowships from the National Endowment for the Humanities, National Endowment for the Arts, New York State Council on the Arts, and New York Foundation for the Arts. She was Artist-in-Residence at the Banff Center for the Arts in Canada, Atlantic Center for the Arts in Florida, and D.A.A.D. Artist Program in Berlin. She recently received a Fulbright Award to Barcelona.