Tai-Danae Bradley came to City College from Richmond, Va., with the goal of playing basketball and preparing for a career that would combine her love of sports with her interest in the sciences. She made the women's team, but soon a couple of events sent her on a very different path.

She developed an interest in physics, a subject she "couldn't stand" in high school, when a problem in a biology class piqued her curiosity about the behavior of proteins. Also, her calculus professor "got me to see math as a new language of ideas and concepts rather than numbers and formulas.

"As an athlete, I was interested in how the body works and thought I would go into sports nutrition or exercise physiology, but I realized all of my original interests in the human body had foundations in math and physics."

Encouraged by her boss in the Office of Student Affairs, former Vice President Dennis Shields, to work toward getting into a PhD program because of her potential, Tai-Danae was faced with a difficult choice. "I knew it would be difficult to balance athletics and academics because of the practices and team-bonding activities, so I had to choose between them and decided to major in math and physics."

Since 2012, she has been working on honors research through the MARC (Minority Access to Research Careers) program and her mentor, Assistant Professor of Mathematics Brooke Feigon. She has one article under consideration for publication and has presented at four MARC conferences. In addition, she has been a peer mentor for three years with the City College Academy for Professional Preparation.

In the fall, she will begin work toward a PhD in mathematics at the Graduate Center, CUNY. Her research goal is an ambitious one: developing mathematical approaches to address a unified field theory. 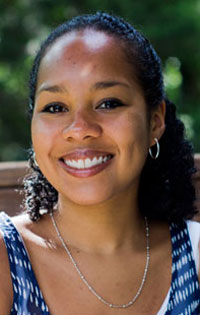 “I realized all of my original interests in the human body had foundations in math and physics.”