Simone Gordon was in her third grade class at PS 135 in Queens Village when she looked up to her teacher, Ms. Quamina, with childlike admiration.

Thirteen years later, Ms. Gordon still remembers that moment, which would inspire her for the rest of her life. "I said I want to be like her when I grow up; a person that inspires and cares for our kids.  Ms. Quamina took genuine interest in her students."

To emulate her favorite teacher, Ms. Gordon, whose family had emigrated from Jamaica when she was six, set standards and goals for herself.  Between her relentless inner drive, her faith in God, and constant reinforcement from her mother about the importance of education, she'd fulfill and, in some instances, exceed them.

The Brooklyn resident is not only graduating from City College's School of Education with a 3.9 GPA and a BS in childhood education, but also punctuated her four stellar years at CCNY with two major honors.

Within the span of a month, she received a Fulbright U.S. Student Award to teach English in Kolkata, India, and she was named Class of 2014 Salutatorian. These honors add to a collection of laurels that includes a Colin Powell Fellowship for Leadership and Service (2011-2013) and the Josh and Judy Weston Public Service Scholarship (2012-2013).

After the Fulbright, Simone plans to enroll in graduate school.  There, she intends to pursue a master's degree in either K-12 education policy or in curriculum and instruction, before embarking on a career as a general education teacher.


Ms. Quamina, who Simone said, still teaches at PS 135, would be very proud, too. 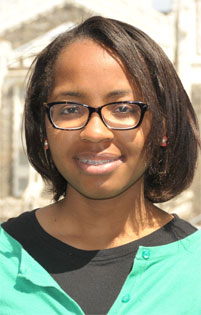 "I said I want to be like [Ms. Quamina] when I grow up; a person that inspires and cares for our kids."