Nancy Hernandez did not dream of becoming a doctor when she was a little girl. Yet her family history, compassion and talents have placed her on the verge of becoming that most sought-after doctor: one who sees the person behind the patient, and the whole community behind the person.

"My upbringing and life experience helps me empathize with patients," she said. "They really open up to me." Aiding her empathy, Nancy is fluent in Spanish and eloquent in English. She speaks French and studied American Sign Language.

Nancy will graduate from The City College of New York this spring as a second-year medical student with a Bachelor of Science in Biomedicine from the Sophie Davis School of Biomedical Education and a 3.9 GPA. She continues her training at New York University Medical School in September.

Nancy, a first-generation American of Colombian heritage, grew up hearing about the consequences of limited access to health care; her grandmother and aunt both died at a young age.

"I always thought it was unjust when a person, because of their position in life, doesn't have access to health care," she said. Her own mother struggled to raise two daughters alone here in New York. "Seeing the struggles they went through has always motivated me."

Nancy discovered her affinity for medicine at Stuyvesant High School. She came to Sophie Davis on Stuyvesant-CCNY and Peter F. Vallone academic scholarships.

As a Mayor's Literacy Fellow in 2010 she taught ESL classes in health-related English. She also worked as an interpreter at Maimonides Hospital in Brooklyn and a clinic in Nashville, Tenn.

In 2011 Nancy traveled to rural Chile to put her training in community-based medicine into practice. She shadowed a local physician and midwife, led workshops in community health for local medical students and assisted in a community health assessment at the Universidad Autonoma de Chile.

The experiences brought home lessons on how the environment impacts health. For example, in New York children battled obesity and diabetes while in Chile they suffered from tapeworms or birth defects caused by pesticides. "That's something the Sophie Davis program has instilled, too – it's not just looking at the patient, but at the entire community." 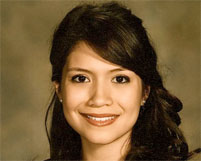 "I always thought it was unjust when a person, because of their position in life, doesn't have access to health care."
- Nancy Hernandez