Working in one lab is challenging enough, but imagine working in two labs in two different counties 17 miles apart in two different disciplines.   That became part of computer engineering major Igor Labutov's routine at The City College of New York.

From the get-go, Mr. Labutov, a native of Russia now residing in Forest Hills, wanted to pursue his passion for robotics.  His freshman year, he joined the CCNY Robotics Club and built a wireless glove to control a robotic hand for which he received a STEP grant and published a paper.  But, he discovered the commercial sensors he used were inadequate for the device.

His quest to improve the design led him to explore the idea of integrating biological models into the design of robotic systems.  That, in turn, led him to Dr. Theodore Raphan, a neuroscientist at Brooklyn College who was studying human locomotion and building a robotics lab to model human movement.

Soon after he began working with Professor Raphan, Mr. Labutov discovered one of his biggest impediments was translating concepts from biology into robotics.  "Each field had its own language and approaches," he said. "Crossing the disciplinary border became synonymous with crossing the border between Manhattan and Brooklyn."

However, he came across a paper by Dr. Auke Ijspeert, who headed the Biologically Inspired Robotics Group at EPFL in Lausanne, Switzerland.  Mr. Labutov adopted Dr. Ijspeert's methods for bridging between biological and classical models in bio-inspired to his own research.  This summer, he will travel to Switzerland to work in Dr. Ijspeert's lab.

Back at CCNY, Mr. Labutov conducted mobile robotics research with his mentor, Professor Jizhong Xiao, focusing on vision systems for ground vehicle navigation and mapping.  His efforts as a member and leader in the International Ground Vehicle Competition helped CCNY go from 22nd place in 2008 to fourth place in 2009.

Recently, he won first place in the masters-level poster competition at the Junior Scientist Conference 2010 in Vienna.  In the fall, Mr. Labutov will begin graduate studies in robotics at Cornell University, supported by a $30,000 National Science Foundation graduate research fellowship. 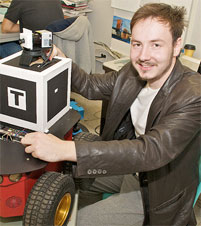 "Each field had its own language and approaches. Crossing the disciplinary border (between biology and robotics) became synonymous with crossing the border between Manhattan and Brooklyn."
- Igor Labutov