Alexa  Mieses already had dreams of becoming a doctor as a junior in high  school.  Then tragedy touched her life, sparking even more focus: to  understand and prevent drug abuse.

When  Ms. Mieses attended Bronx High School of Science four students died - three of  drug-related causes.  A sophomore she  mentored was one of them, a victim of a heroin overdose.

"I  wish I could have intervened earlier," she recalled.  But the misfortune  galvanized her with the idea to use drug interdiction to save lives.

"That  fire inside of me from high school is still burning," she said. "I want very  much to look at addiction from a more professional and scientific point of  view."

Her  childhood in Queens also shaped her choices.  Ms. Mieses recalls walking  to a clinic where her mother was treated for type 2 diabetes. Fast food  businesses, which serve the kinds of foods that contribute to the onset of the  disease, lined the route.

Classes  at City College later put a name to what was going on: health disparities.  She became fascinated by their link to poverty  and ethnicity. "That's what gives me such a great sense of urgency and the  passion to do what I've done since I've been at CCNY."

She  volunteers at Montefiore Medical Center in the Bronx and tutors low-income  children at the Champion Learning Center in Lower Manhattan.  As the coordinator for the CCNY Minority  Association of Pre-Health Students'  "Harlem Take Care of Yourself" health fair,  she helped increase attendance twenty-fold.

She  also interned at the Bronx Zoo, the Gay Men's Health Crisis Center and worked  with autistic children in Chile, as a Watson Fellow.  Ms. Mieses was awarded the Outstanding SEEK Graduate of the Year Award this year; she is a SEEK Scholar and a SEEK mentor and tutor, and belongs to three honor societies.  In addition, she shadowed  a surgeon in private practice, conducted neuroscience research on eye movements  and studied Spanish and art history in Spain.

Outside  of school Ms. Mieses writes poetry and loves singing.

After  her fellowship and medical school, Alexa plans to return to New York. "I hope  to work with people in the same area I grew up, or the Bronx or Harlem, and  have that in common with people I serve one day." 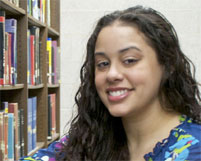 "That fire inside of me from high school is still burning. I want very much to look at addiction from a more professional and scientific point of view."
- Alexa Mieses