Outside the classroom, Siddiq Mohammed, a native of Trinidad and Tobago, spends much of his time planning events, engaging in social media and promoting friends who patronize the skateboard shop where he works part-time. "I thought it was a hobby. I didn't realize it could be a career," the Bronx native says. "I was doing it on my own time not realizing it was part of advertising and public relations."

At the suggestion of a friend, he enrolled in a few introductory courses in CCNY's undergraduate advertising and public relations program and soon "realized that was the major for me." A good thing, too, since previous forays into civil engineering, biology and political science had not panned out for him.

Siddiq possesses many of the qualities needed to succeed in his chosen field. He can work with teams; think outside the box and enjoys working with people. In class, he exercised his leadership skills on group projects and, he proudly proclaims, his teams never lost in class competitions.

Not content to wait until graduation to apply his skills, Siddiq is handling publicity for the skate shop and is promoting some of his skateboarding friends. He helped one talented young skateboarder garner three sponsors and has produced skateboarding films, as well.

In addition, he is using his newly gained communications skills in Dawah – educating non-Muslims and Muslims about the Islamic faith. For example, he often asks someone a question to pique his or her curiosity about a topic.

As an advertising/public relations major, Siddiq has mastered the ability to work with people having different points of view and ideas, even "people you don't like." However, he has no complaints about his professors, adding that: "all of them were great."

After graduation, Siddiq plans to look for a full-time position in public relations. He also thinks about applying his political science background to work as a lobbyist, and mentions the Center for American Islamic Relations as a dream employer. Until then, he'll continue to do publicity for the skate shop and manage its team. 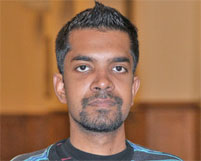 "I thought it was a hobby. I didn't realize it could be a career. I was doing it on my own time not realizing it was part of advertising and public relations."
- Siddiq Mohammed