Anthony Pang has a secret for success: follow your nose. He  goes wherever his interests lead him.

"I had an interest in policy, so I  became involved in the Colin Powell Center (for Policy Studies); in the  environment, so I worked on a biodiesel initiative; and in robotics, so I  worked in the robotics lab."

Anthony has helped design  satellites for NASA as a member of the CUNYSAT-1 team. His freshman year, he  did work in robotics with Dr. Jizhong Xiao, associate professor of electrical  engineering in CCNY's Grove School of Engineering.  As a sophomore, he joined  a student initiative to modify a small, 1930's-era diesel engine to run on  bio-fuel.

Last year, he modeled ice sheet  movement with the Caltech/NASA Jet Propulsion Laboratory. At the Powell  Center, he wrote on engineering policy and developed  modules to teach engineering to high school students.  With this busy schedule, he still found time  to write for "The Campus," CCNY's student newspaper.

To excel as a student, one should take advantage of each  interesting activity that comes along, he suggests.  "You have every  opportunity here, so the only thing limiting you is yourself."

His strategy served him well. Anthony  was a finalist for a Truman Scholarship, which is given to students with public  service interests, and he received honorable mention in the Goldwater  Scholarship competition, which recognizes science aptitude. He was the 2008-2010  Fulvio Dobrich New Americans Scholar at the Powell Center and president of the Tau Beta Pi engineering society.

A mechanical engineering major in  the Grove School, he is one of three CCNY students awarded National  Science Foundation (NSF) Graduate Student Research Fellowships this year. His  $121,500 grant will support him through three years of research as a PhD  student studying aeronautical and aerospace engineering at MIT.

There, he will work with Dr. Manuel Martinez-Sanchez,  professor of aeronautics and astronautics and director of MIT's Space  Propulsion Laboratory, to develop plasma dynamic simulations for space  thrusters. This research could help make interplanetary space travel  possible, perhaps putting Mars within human reach, he says.

For Anthony Pang, the sky is no limit.  His interests could lead him all the way to  Mars. 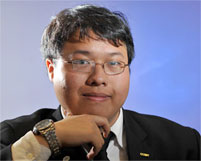 "You have every opportunity here, so the only thing limiting you is yourself."
- Anthony Pang