The beauty of CCNY's campus inspired David Seto of Washington Heights to become an architect. "I want to give people the same feeling I get when I look up at these buildings and when I go inside these spaces," he explains. "I want to create these kinds of spaces and have other people experience it."

David's journey toward becoming an architecture student was marked by challenges that most students, thankfully, never face. Born to a family of Chinese immigrants, he experienced many hardships early on. At 18, he was turned away from his home and was forced to face life on his own. With no place to turn, he sought help from his school friends. For some time, he had to stay at their houses and get part-time jobs to pay his way through CCNY. It wasn't until last summer that he could afford his own apartment.

At City College, an upperclassman named Quincy Wallace helped David find his calling. Quincy's dedication to helping people around him by staying late in the CAD lab to keep it open for other students, for example, had a profound affect on him. After Quincy graduated, David stepped in to fill his shoes. "Quincy inspired me to be the person I am now," he recalls. "Whenever people have questions I have no problem dropping what I'm doing and helping them to learn."

David's willingness to help others has earned him many friends in The Bernard & Anne Spitzer School of Architecture. Several students and faculty members raised money to buy him a laptop computer. The School honored his service with the 2009 Alpha Rho Chi Medal and he received the Alumni Association's Robert Swaybill Scholarship in 2008. While proud of his achievements, the connections to people matter most to David. "Thank God for architecture students. They have become my family." 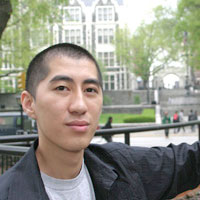 "I want to give people the same feeling I get when I look up at these buildings and when I go inside these spaces."
- David Seto