Zoe Spanos entered the Macaulay Honors College at City College with a keen interest in the humanities honed at the Academy of American Studies, where she was 2007 valedictorian. A science requirement she fulfilled in her sophomore year changed her life. The history buff transitioned to biology.

A year later, Ms. Spanos was retracing some of Charles Darwin's footsteps on the Galapagos Islands and studying evolution conservation and ecology through a Macaulay study-abroad program. She is now graduating with a BS in biology, a 3.9 GPA and as Class of 2012 Salutatorian.

Ms. Spanos, a first-generation American with a Greek father and Mexican mother, is overwhelmed by the honor. "I am proud to have been selected Salutatorian of one of New York's most timeless institutions," she said. "City College has been a transformational experience for me and the knowledge that I've gained here has helped determine what I would like to do the rest of my life."

Also, City College is a Spanos family affair. One of her brothers graduated in 2010. Another is set to begin this fall.

Ms. Spanos plans a research-oriented career and will continue her studies at CCNY in the fall. Her graduate work, designed to keep her on track toward a doctorate in ecology and evolutionary biology, will include a research project with Assistant Professor of Biology Ana Carnaval. They will study the diversity of amphibian skin alkaloids to further understand the ecological and evolutionary processes that contribute to the large variation of skin toxins across frog populations. 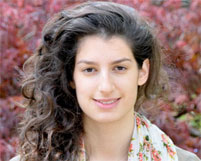 "City College has been a transformational experience for me and the knowledge that I've gained here has helped determine what I would like to do the rest of my life."
- Zoe Spanos