As a young child in his native Nigeria, Joshua Usani watched  his mother, a registered nurse, and her colleagues administer polio  vaccines.  That first sparked his  interest in medicine.  Later, he volunteered with an ambulance company in  Lagos. After seeing a doctor save a life, he "resolved that if I could touch  people's lives in this very basic, yet powerful way, the satisfaction I would  receive would justify all the challenges associated with the pursuit of a  medical career."

A resident of the Bronx who once worked at a McDonald's  restaurant in Harlem to help pay his way, Joshua has been selected  valedictorian of The City College of New York Class of 2011.  After graduation, he will follow his dream of  becoming a physician by studying medicine at Mount Sinai University School of  Medicine.

As a biology major, Joshua worked in City College's molecular immunology  research lab under the direction of Professor Jerry Guyden.  His research  project, which sought to understand how the immune system attacks the body in  autoimmune diseases and to develop treatments, made him one of three CCNY  students to receive the prestigious Salk Scholarship. In his project, he used a  confocal microscope to identify the distribution of lysosomes in specialized  epithelial cells in the thymus.  These thymic "nurse" cells are crucial in  T-cell development.

"The most amazing aspect of my experience at City College is the people that I  have interacted with, from amazing classmates to professors that are personally  invested in your success," he said. "This incredible resource got me through  rough times and placed me in a great position to achieve my goals."

In addition to the Salk Scholarship, he won a scientific  award at the 2009 CSTEP Conference, and the Edmund Baermann and Meyer &  Gloria Fishman awards.  He also served as a chemistry workshop leader and  is a member of the Golden Key International Honor Society and Phi Eta  Sigma.  He likes to play basketball, piano and soccer and is interested in  computer programming. 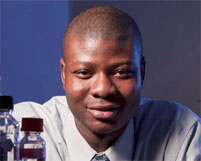 "The most amazing aspect of my experience at City College is the people that I have interacted with, from amazing classmates to professors that are personally invested in your success."
- Joshua Usani