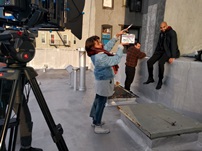 The BFA in Film and Video Production Admissions Deadline for Fall 2023 is April 21st, 2023

Applications will be Available on January 25th, 2023

First established in 1941 as Masters Institute of Film Techniques, the BFA Film & Video Program in the Department of Media & Communication Arts provides a broad range of fundamental production skills in the areas of fiction and documentary media production. Courses in screenwriting, directing, production, and editing prepare students to create in digital video. Students also take critical studies courses in the history, theory, and aesthetics of cinema to inform and contextualize their production skills.

The BFA degree in Film & Video requires a minimum of 54 credits, which includes the three pre-requisite courses MCA 10100 (Intro to Media Studies), 10500 (Intro to Media Production) and 12100 (Intro to Film Studies). The program of study starts each fall semester and is completed in a continuous and pre-determined 4-semester, 2-year cycle. The curriculum is structured on the idea that you learn best when you are engaged with different but related aspects of the filmmaking process all at the same time. As such, in each semester of the program you will always have a production course, a theory or history class, and a craft course (i.e., editing, screenwriting, sound, etc.).

*Students are asked to specify an interest in either one of two "tracks", which deteremines the exact courses in their second year of study: The options are either our "Fiction" or our "Documentary" track; the program limits the number of students in each track, and admissions space in the program in limited by the availability of space in either track. Students are admitted in to one of these tracks of study and agree to complete the course of study for that track.

A thesis project is required of all students graduating with a BFA degree, which is a 10 minute film or video production in your selecetd track (Fiction or Docmentary).