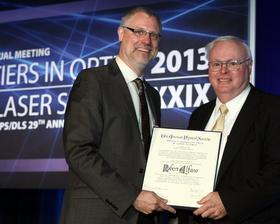 Dr. Robert R. Alfano, distinguished professor of science and engineering at The City College of New York, was presented with the Arthur L. Schawlow Prize at the the American Physical Society (APS) Division of Laser Science and Optical Society of America (OSA) meeting, held last month in Orlando.

The Schawlow prize “recognizes outstanding contributions to basic research that uses lasers to advance our knowledge of the fundamental physical properties of materials and their interaction with light.” Professor Alfano was recognized for his “pioneering contributions to the field of ultrafast laser science, including the discovery of supercontinuum generation and new laser materials, as well as the study of pulse propagation in strongly scattering media.”

Professor Alfano also presented the Schawlow lecture at the meeting; his topic was “Optical Physics Discoveries Using Ultrafast Lasers.” The talk reviewed salient breakthrough contributions in the field of ultrafast laser science, including the discovery of supercontinuum generation, discovery of new laser tunable Cr (chromium) materials, as well as the study of pulse propagation, the key lengths of absorption, scattering, and transport scattering and imaging of objects in strongly scattering media using several optical gates.

A member of the CCNY faculty since 1972, Professor Alfano holds more than 110 patents and has author credits on more than 730 research articles. His work has been cited in other papers more than 12,400 times. He is an Alfred P. Sloan Fellow as well as a fellow of APS, Optical Society of America (OSA), IEEE and the New York Academy of Sciences.