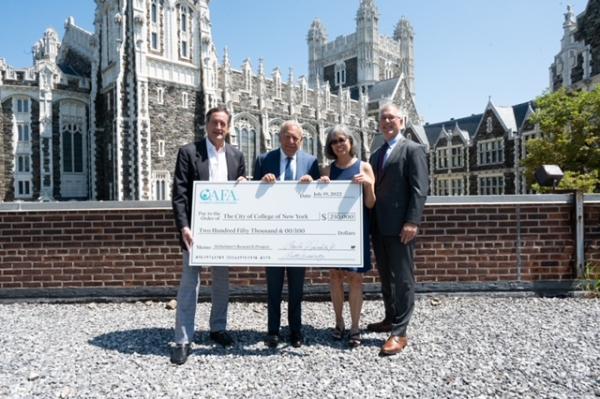 The Alzheimer’s Foundation of America (AFA) has awarded a $250,000 research grant to The City College of New York to fund new Alzheimer’s research which could potentially lead to the development of new medications to treat the disease. The project aims to learn more about the role that disrupting the amyloid precursor protein (APP) plays in causing Alzheimer’s.

“Scientists have been working hard and making progress, but there is still more we need to learn and discover about Alzheimer’s disease,” said AFA Founder and Board Chair Bert E. Brodsky. “We are pleased to support CCNY’s research and are hopeful that it will lead to the breakthrough all of us are hoping and praying for.”

“Every dollar invested in Alzheimer’s research is an investment in hope,” said AFA President & CEO Charles J. Fuschillo, Jr. “CCNY’s research has the potential to unlock some of the mysteries surrounding Alzheimer’s disease and hopefully facilitate new treatments, which would be a game-changer in the fight against Alzheimer’s. AFA is proud to support their efforts.”

The APP gene family is essential for viability in mammals, but its function is unclear. Mutations in the genes for APP and in the enzymes that interact with APP have been found in familial Alzheimer’s disease (a form of Alzheimer’s disease which is linked to genes and affects at least two generations of a family), suggesting that disruption of APP can lead to Alzheimer’s disease.

Led by Christine Li, Principal Investigator and a professor in CCNY’s Department of Biology, the project aims to identify the role that APP plays in brain health and Alzheimer’s disease using the C. elegans model system. This research can then be translated into discoveries in mammals that could potentially lead to the development of new medications to treat Alzheimer’s that do not interfere with APP function.

“We are immensely grateful to the Alzheimer’s Foundation of America and its donors for their support of our research,” said Li. “Alzheimer’s is a devastating disease not only to the individual, but to the family. All different avenues of research must be pursued to identify possible therapies to alleviate symptoms and, ultimately, to find a cure.”

“An estimated six million Americas are living with Alzheimer's disease and that number is estimated to almost double within the next few decades. This grant from the Alzheimer's Foundation of America will support the important research being led by Professor Li and her research team,” said City College President Vincent Boudreau. “We are grateful to AFA's Board Chairman, Bert Brodsky, CCNY class of 1964, Charles Fuschillo, Jr., AFA's President and CEO and the AFA Board for their support and partnership, which we hope will further the important scientific work being done on our campus and around the world.”

AFA is able to award research grants such as this through the generosity of individuals and organizations. To make a donation to support AFA’s research efforts, as well as programs and services for families affected by Alzheimer’s disease, click here or call AFA at 866-232-8484.
.
About The Alzheimer’s Foundation of America
The Alzheimer’s Foundation of America is a nonprofit organization whose mission is to provide support, services and education to individuals, families and caregivers affected by Alzheimer’s disease and related dementias nationwide and to fund research for better treatment and a cure. Its services include a National Toll-Free Helpline (866-232-8484) staffed by licensed social workers, the National Memory Screening Program, educational conferences, and support materials, and “AFA Partners in Care” dementia care training for healthcare professionals. For more information about AFA, call 866-232-8484, visit www.alzfdn.org, follow AFA on Twitter or connect with the foundation on Facebook, Instagram, or LinkedIn. AFA has earned Charity Navigator’s top 4-star rating for seven consecutive years.

About The City College of New York
Since 1847, The City College of New York has provided a high-quality and affordable education to generations of New Yorkers in a wide variety of disciplines. CCNY embraces its position at the forefront of social change. It is ranked #1 by the Harvard-based Opportunity Insights out of 369 selective public colleges in the United States on the overall mobility index. This measure reflects both access and outcomes, representing the likelihood that a student at CCNY can move up two or more income quintiles. In addition, the Center for World University Rankings places CCNY in the top 1.8% of universities worldwide in terms of academic excellence. Labor analytics firm Emsi puts at $1.9 billion CCNY’s annual economic impact on the regional economy (5 boroughs and 5 adjacent counties) and quantifies the “for dollar” return on investment to students, taxpayers and society. At City College, more than 16,000 students pursue undergraduate and graduate degrees in eight schools and divisions, driven by significant funded research, creativity and scholarship. CCNY is as diverse, dynamic and visionary as New York City itself. View CCNY Media Kit.