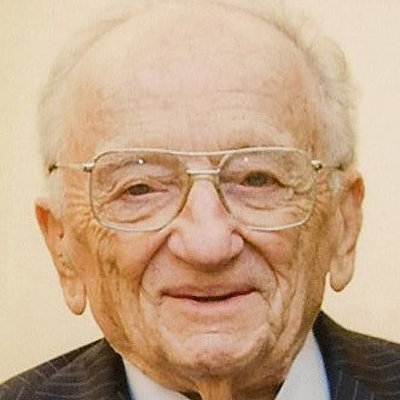 Centenarian Benjamin B. Ferencz of CCNY's Class of 1940 was the keynote speaker and honorary degree recipient at his alma mater's Virtual Salute.

In a historic Virtual Salute, the first in its 173-year legacy, City College of New York’s Class of 2020 was charged by the institution’s oldest known living alumnus, centenarian Benjamin B. Ferencz, former U.S. vice president Joe Biden and other speakers to help shape a post-COVID-19 world.

A distinguished 1940 alumnus and the last surviving prosecutor from the post-WWII Nuremberg trials, Mr. Ferencz passed the baton, after a life-long activism for human rights and the rule of law, to City College’s newest graduates following in his footsteps 80 years later.

“How do you get people to accept compromise, compassion and human rights as mandates? That’s the challenge that you face,” the honorary Doctor of Laws degree recipient told the 3,833 graduates in his keynote address. “I pass that burden on to you. I have done as much as I could during one lifetime.”

Mr. Ferencz, who turned 100 on March 11, implored them to use their education for the benefit of all mankind.

U.S. vice president from 2009 to 2017 under the Obama administration, Biden predicted that CCNY’s Class of 2020 would play a major role in America’s recovery from the COVID-19 pandemic.

“We are going to get through this and we’re going to need your passion, your integrity, and the skills that all of you have to offer to  help rebuild and transform this country into a better country than it was even before this,” said the presumptive Democratic nominee for the U.S. presidential election. “We have a genuine opportunity to come out of this crisis stronger than we’ve ever been and this Class of 2020, you are going to be a big part of that.”

Other speakers also spoke of the graduates’ vital role in the nation’s post-pandemic recovery.

Charles E. Schumer, senior U.S. Senator from New York, said: “When the worst is over, we’ll need your help to rebuild our country even stronger than it was before. You are our future leaders and we have faith in you.”

New York State Lieutenant Governor Kathy Hochul challenged the Class of 2020 to emulate the “Greatest Generation,” that heroic generation of Americans, including Mr. Ferencz, who lived through the Great Depression, fought in World War II and helped win it.

“In history class you heard how the Greatest Generation led many to achieve the elusive American dream,” said Hochul. “Now your country is turning to you, our next generation, for inspiration and hope as we define our legacy and look for a more just and civil society.”

From City College President Vince Boudreau came the reminder that CCNY was established in 1847 to produce graduates that would respond to challenges such as the nation is facing now.

“It was founded specifically behind the idea that the talents of the whole people -- the talents of each and everyone one of you -- are necessary for us to solve the most important questions that we face,’’ said Boudreau. “Leave this place carrying the burden and the responsibility, and the insight of our founding, the insight of our mission, to leave this place and go into the world and fix the things that are wrong.”

“We have utmost confidence in your abilities to meet these challenges,” he added.

Valedictorian Sabastian Hajtovic accepted the challenge on behalf of the Class of 2020. “We are going to have to be the generation that finally takes on the serious task of solving our global issues. What happens in a small town, a village, or a lab anywhere in the world should matter now more than ever,” said Hajtovic.

He’s the recipient of a B.S. degree in biomedical science with a 4.0 GPA.

Salutatorian Isabella Joseph, the recipient of a bachelor of architecture degree with a 3.94 GPA, also had a similar charge for her fellow graduates. “As our city and our world rebuild from the immediate crisis, we are uniquely positioned to boldly reimagine its future.”