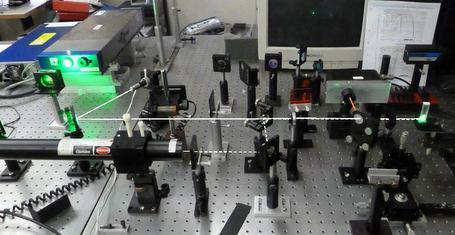 “Light gives you far greater molecular information than the common modalities like chemical tests, X-Rays, CAT scans, which all provide an image and not the content,” said Alfano, Distinguished Professor of Science and Engineering at CCNY and an inventor with more than 120 patents to his name.  “Light can show you at the molecular level what the tissue is all about and display the difference between good tissue and bad tissue.”

Specifically, Alfano explained that the non-invasive method works by using the key wavelengths to excite the Raman effect from vibrations in tissue of the brain, breasts and arteries. The colors emitted are different and are part of a larger set of optical methods he’d developed since 1984 called Optical Biopsy.  These methods will enter medical armamentarium.

The Raman spectra is very weak for every million photons entering a material 1 is scatter from vibrations in the material. With a major new advance the Raman effect is enhanced 1000s fold by Resonance Raman (RR), enabling the detection of cancer using light from vibrations in tissues and cells. RR can also identify distinctive margins that may aid in the removal of most of the malignant tissue.

The Raman effect was discovered in 1928 by C.V. Raman who won a Nobel Prize in 1930. The first RR observation in tissue was made by Alfano in 1987 and later by non-resonance Raman in 1991 to diagnose cancer.  This new work overcomes the weakness of the Raman intensity and allows the Raman effect to enter the medical field. It will be utilized in hospitals in China for the detection of brain and other cancers.

This research by Alfano’s group in the City College-based CUNY Institute for Ultrafast Spectroscopy and Lasers earned the RR U.S. patent #10 426 349.
Ongoing research at CCNY to expand RR as an optical biopsy method, and to  develop Resonant Stimulated Raman scattering microscopes using compact lasers, has garnered a second U.S. patent # 10 281 331.

Renowned for his discovery of Supercontinuum, Alfano was the recipient of the Eastern New York Intellectual Property Law Association’s 2018 Inventor of Year award and SPIE’s 2019 Gold Medal Award.