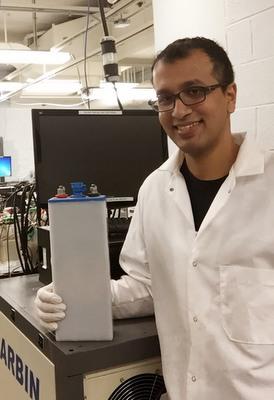 Researchers at The City College of New York-based CUNY Energy Institute announce the development of a novel low cost, rechargeable, high energy density battery that makes the widespread use of solar and wind power possible in the future.  It is based on manganese dioxide (MnO2), an abundant, safe and non-toxic material.

Past researchers have achieved either high cycle life or high areal capacity, but never both together, the team notes.

The innovation that makes this possible is intercalating copper (Cu) into bismuth-modified δ-MnO2, which is called birnessite. The latter was discovered by Ford Motor Company in the 1980s, but it was never known how to use it at high areal capacity. This was later discovered at the CUNY Energy Institute by a team led by Sanjoy Banerjee, Distinguished Professor and director of the Institute.

The battery is intended for use at the scale of the power grid. This would make widespread use of solar and wind power possible.

The research was funded by an Advanced Research Projects Agency-Energy (ARPA-E) grant from the Department of Energy.