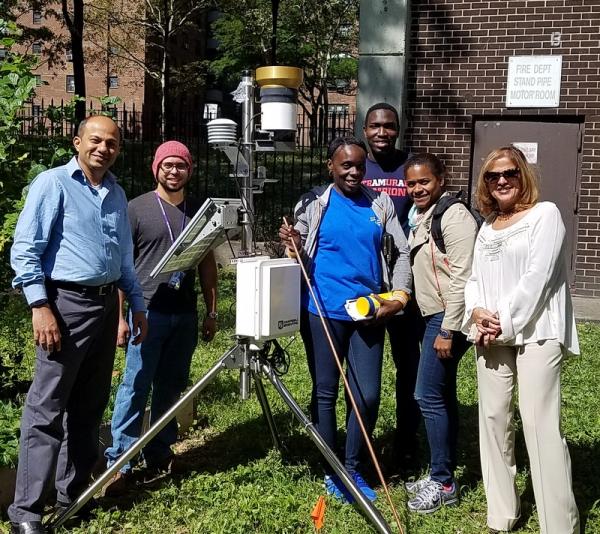 Dotted around four of New York’s five boroughs are 19 autonomous mini-meteorological stations established by The City College of New York-based NOAA Center for Earth System Sciences and Remote Sensing Technologies (NOAA CESSRST) and CUNY CREST Institute. This is part of CCNY’s singular response to the rising seas and extreme weather conditions in the city caused by climate change.

Dubbed the NY-uHMT (New York Urban Hydrometeorological Testbed) project, it is a one of a kind high-density hydro-meteorological weather network, according to the New York City Mayor’s Office of Recovery and Resiliency, a partner in the venture.

NY-uHMT is designed to monitor basic meteorological and hydrological variables to assess the variability in the city’s microclimates and their response to extreme events.

The overarching research objectives of NY-uHMT are:

•    To improve the accuracy and lead time of measuring and accessing the precipitation and providing flash flood forecasts and warnings in the New York City region;

•    To create impacts-based, urban-scale flash flood and hazard warnings and forecasts for a range of public and private decision-makers that result in measureable benefit for public safety and the economy;

In addition, data produced from the NY-uHMT stations will be available to  the general public, agencies and researchers through open access servers located at center website (click here).  For any additional information about data and site locations, please contact Tarendra Lakhankar.

CCNY’s other partners in project include the National Environmental Satellite, Data, and Information Service and USDA-ARS Hydrology and Remote Sensing Laboratory, both based in Maryland; and the New York City Housing Authority (NYCHA).