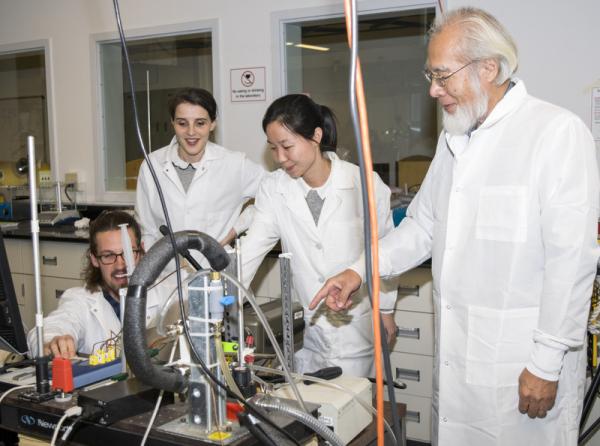 A five-year research project on complex fluids with potential for transformative scientific discoveries in industries from petro-chemical to cosmetics is underway at The City College of New York’s Grove School of Engineering.  Funded by a $5.2 million National Science Foundation grant, the initiative includes 11 partner institutions in France, Germany and Norway.

Possible outcomes of the research include:

Leading the hi-tech research, under the aegis of the NSF’s Partnerships for International Research and Education (PIRE) program, is Masahiro Kawaji, acting director of the CCNY-based CUNY Energy Institute.

CCNY’s European partners are, in Germany:

In addition to engaging top scientists and engineers from these institutions in what Kawaji terms “advancing knowledge and making transformative scientific discoveries that could result in far reaching innovations, in both experimental and modeling methods,” the PIRE Project is also a boon for scores of students on both shores.

At CCNY, up to 30 students are involved hands-on in this invaluable opportunity for international collaborative research at the highest level. The tally includes seven PhD candidates, three postdoctoral fellows, 10 graduates and 10 undergraduates.

Other foreign research experience include attendance at annual review meetings in New York City, Norway, France and Germany, and a six-month internship for all seven PhD students at institutions in Europe.

Summing up the potential of the expansive project, whose NSF proposal name was “PIRE: Multi-scale, Multi-phase Phenomena in Complex Fluids for the Energy Industries,” Kawiji said: “It could lead to improvements in energy and process efficiency in industrial systems on a global scale.”