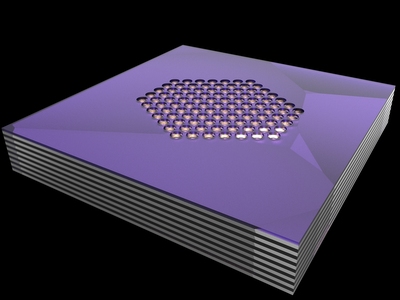 This could lead to such benefits as ultrafast LEDs for Li-Fi (a wireless technology that transmits high-speed data using visible light communication),  enhanced absorption in solar cells and the development of single photon emitters for quantum information processing, said Vinod M. Menon, professor of physics in City College’s Division of Science who led the research.

Photonic crystals and metamaterials are two of the most well-known artificial materials used to manipulate light. However, they suffer from drawbacks such as bandwidth limitation and poor light emission. In their research, Menon and his team overcame these drawbacks by developing hypercrystals that take on the best of both photonic crystals and metamaterials and do even better. They demonstrated significant increase in both light emission rate and intensity from nanomaterials embedded inside the hypercrystals.

The CCNY research appears in the latest issue of the Proceedings of the National Academy of Sciences. The team included graduate students Tal Galfsky and Jie Gu from Menon’s research group in CCNY’s Physics Department and Evgenii Narimanov (Purdue University), who first theoretically predicted the hypercrystals. The research was supported by the Army Research Office, the National Science Foundation – Division of Materials Research MRSEC program, and the Gordon and Betty Moore Foundation.

About The City College of New York
Since 1847, The City College of New York has provided low-cost, high-quality education for New Yorkers in a wide variety of disciplines. Today more than 16,000 students pursue undergraduate and graduate degrees in eight professional schools and divisions, driven by significant funded research, creativity and scholarship.  Now celebrating its 170th anniversary, CCNY is as diverse, dynamic and visionary as New York City itself.  View CCNY Media Kit