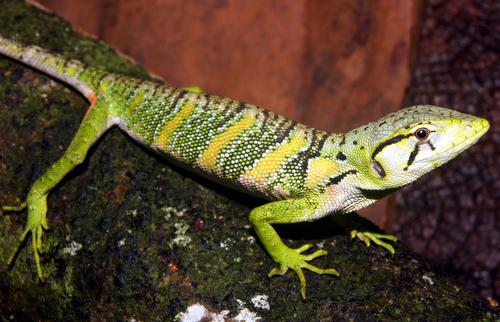 Polychrus Marmoratus, the multi-colored bush anole, one of the
target lizard species of the CCNY-led study in South America.

Using genomic data from three lizard species, City College of New York-led researchers gleaned insights not available before on the impact of climate change on the distribution of animal populations in South American forests. The findings improve ways of modeling the distribution of biodiversity in the past and future.

“We saw that as the forest has changed, lizard populations have also changed. Yet, different lizards species showed either expansions or contractions, suggesting that responses to climate change are not the same for every organism,” said Ivan Prates, a PhD student in the Carnaval Lab in City College’s Division of Science and the Graduate Center, CUNY. He is the first author of the study.

The team studied the genomes of species widespread in the Amazon and Atlantic forests, asking if and how populations expanded or contracted in response to changes in precipitation over the last 200,000 years. It then inferred how widely these lizards have been able to disperse over time.

“By studying genomes, which guard signatures of how population sizes changed over time, we inferred how abundant and widespread these organisms were in the past. This allowed us, for the first time, to outline plausible scenarios of the distribution of genomic diversity for the future,” said Prates.

The study, “Inferring responses to climate dynamics from historical demography in Neotropical forest lizards,” is a collaboration between the Carnaval and Hickerson laboratories in CCNY’s Department of Biology. Other co-authors include CCNY’s Alexander T. Xue, Ana C. Carnaval and Michael J. Hickerson. It appears in the latest PNAS and was jointly funded by NSF, the Brazilian science agency FAPESP and NASA.