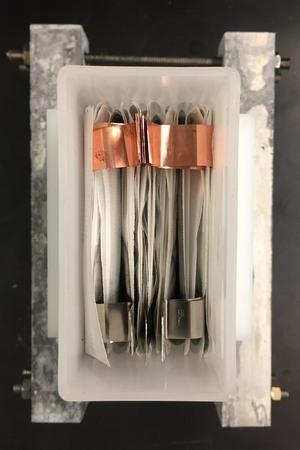 A new generation of manganese dioxide-zinc batteries with unprecedented cycle life and energy density is the latest innovation at The City College of New York-based CUNY Energy Institute. The discovery has made the common household battery suitable for large grid storage applications.

City College Senior Research Associate Gautam G. Yadav and his team applied a new twist to the old chemistry behind batteries. The result is a battery that takes advantage of intercalation and complexation chemistry to make the cathodes rechargeable to a larger extent, greatly extending its life.

“A new layered crystal structure of manganese dioxide is used in this chemistry, which is intercalated with copper ions. This makes it rechargeable to its theoretical capacity for a significant number of cycles,” said Yadav.

According to Yadav, this is the first time a novel calcium hydroxide interlayer is used to block the poisonous zinc ions through complexation. This in turn   allows the battery to maintain its high energy density over 900 cycles.

A recent trend in the energy storage field has been to replace unsafe and expensive lithium-ion batteries with zinc-anode versions as zinc is cheap, abundant and much safer. Until now, the only detriment of this version has been the latter’s relatively short cycle life, which has not allowed it to be successfully commercialized as a rechargeable battery.

The Yadav team’s research appears in the Journal of Materials Chemistry A.