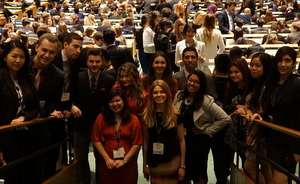 Maintaining its tradition of excellence at the annual international event, The City College of New York won the Distinguished Delegation Award at the 2016 National Model United Nations (NMUN) Conference in Manhattan.

The NMUN is the largest and most prestigious conference of its kind. It attracts close to 5,000 delegates from six continents.

This is the second straight year that CCNY, whose team comprises students from Adjunct Instructor Rafal Szczurowski’s Model UN course in the Colin Powell School for Civic and Global Leadership, has earned this distinction.

In addition to the team award, CCNY’s Sandrine Persaud and Solanghely Raffo won the   Outstanding Delegates in Committee Award for their engagement in UNICEF.

Student Arlene Usha said her experience at the Model UN had changed her world view and enhanced her love of advocacy.

The other members of the delegation were:

According to Szczurowski, of the international studies program in the Colin Powell School, and the team’s faculty advisor, the conference can be a life-changing event.