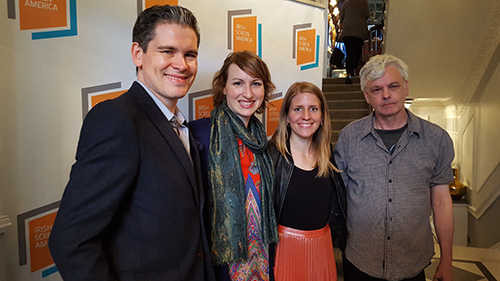 “I woke up one night and thought Marketa Irglova would be best person to write the music because she wrote “Falling Slowly” [Academy Award winner] from the film “Once,” said Scanlon, a native of Galway, Ireland. “As a librarian at the Division of Interdisciplinary Studies at the Center for Worker Education, I used my skills to track down her agent and soon Marketa was on board.”

Scanlon produced and wrote this cinematic version of a love story set in 1997 during “The Troubles,” as the Northern Ireland conflict was known.  Victor, the protagonist, has abducted his childhood sweetheart for a minor transgression, but the pull of their love and history wrestles with the push of the violence that he inhabits.

The short film features lead actors from the stage version, Anna Nugent as Woman, and Paul Nugent as Victor McGowan.  Scanlon is a graduate of CCNY’s MFA in Creative Writing program.