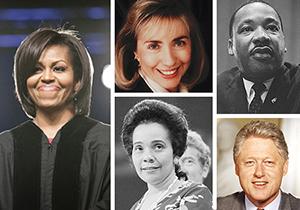 More than 40 years ago, Coretta Scott King became the first female commencement speaker in the history of The City College of New York when she addressed CCNY’s Class of 1971. Her charge to the graduates came eight years after her slain husband, Dr. Martin Luther King, Jr., had delivered the commencement address to the Class of 1963.

The occasion is likely to be more than memorable for the Class of 2016, the college and surrounding community. That is because it will be Obama’s final commencement address as First Lady before she and her husband, President Barack Obama, leave the White House on January 20, 2017.

It also comes 17 years after one of her predecessors, Hillary Clinton, spoke to CCNY’s Class of 1999 and received the City College President’s Medal.

Clinton, currently a Democratic candidate for the White House, was followed to CCNY by her husband, former President Bill Clinton, in 2004. He was the speaker and an honorary degree recipient at City College’s 158th commencement exercises.