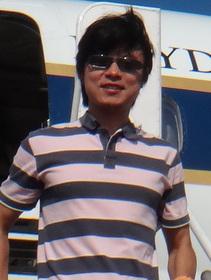 The team was cited by NASA Administrator Charles Bolden for "outstanding accomplishments in Studies of Emissions and Atmospheric Composition, Clouds and Climate Coupling by Regional Surveys (SEAC4RS)."

According to the award letter, the honor is "one of the most prestigious awards a group can receive and is presented to selected groups who have distinguished themselves by making outstanding contributions to the NASA mission."

Luo has served as one of 12 lead scientists on the NASAairborne mission SEAC4RS to study how convective clouds help process and transport air pollutants, including those from wildfires. The mission began in August 2013 and lasted until late September 2013 with the team crisscrossing the southwestern United States in two aircraft. On September 13, 2013, Luo led a flight into Hurricane Ingrid over the Gulf of Mexico.