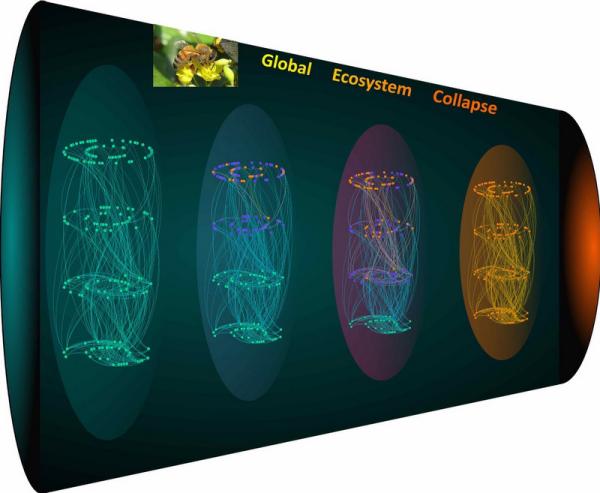 A network metric called the K-core could predict structural collapse in mutualistic ecosystems, according to research by physicists at The City College of New York. The K-core appears able to forecast which species is likely to face extinction first, by global shocks such as climate change, and when an ecosystem could collapse due to external forces.

Led by Flaviano Morone and Hernán A. Makse, the physicists from CCNY’s Division of Science used state of the art network theory to predict the tipping point of an ecosystem under severe external shocks like a global increase of temperature. They determined that a network metric termed the K-core of the network can predict the terrifying tipping point of climate Armageddon.

The idea applies to any network -- from species interacting in ecosystems, like plant-pollinators or predator-prey -- to financial markets where brokers interact in a financial network to determine the prices of stocks and products.

In all these networks a hierarchical structure emerges: each species in the ecosystem belong to a given shell in the network: the so called K-shells. In the periphery of the network is where the commensalists live. These are species that mainly receive the benefits from the core of the network but give nothing back (not to be confused with parasites which benefit from but at the same time harm the network core).

“Amazingly, these peripheral shells are highly populated, indeed, there are many commensalist species in most ecosystems and markets,” noted Makse. “These species are predicted to go extinct first and much before the entire ecosystem collapses.”

Fortunately, the CCNY theory provides early warning signals that can be monitored to predict this collapse well in advance.  Indeed, monitoring the health of the vital inner K-core of the network is the clear marker to anticipate the ecosystem collapse.

“The theory has enormous implications for not only monitoring ecosystem's health but also financial markets,” said Makse.

The study, whose other co-author is research associate Gino Del Ferraro, appears in the current issue of Nature Physics. Click here to read the entire paper.