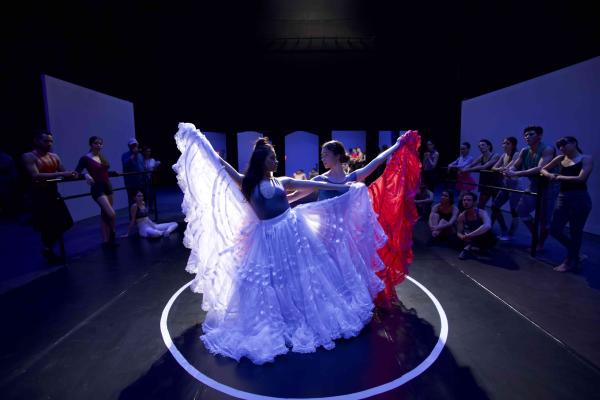 Screen shot from legendary Spanish filmmaker Carlos Saura's 2021 movie “The King of all the World,” that premieres in New York on the opening night of TAFFNY 2022.

In-person for the first time in three years, The Americas Film Festival New York (TAFFNY) opens on June 17 with the New York premiere of “The King of all the World” by legendary Spanish filmmaker Carlos Saura at the Instituto Cervantes New York. TAFFNY ends on June 24 with its awards ceremony at the National Museum of the American Indian followed by a special presentation of “Bootlegger” by Anishinaabe/French director Caroline Monnet.

A cultural initiative of the Division of Interdisciplinary Studies at the Center for Worker Education of the City College of New York, this ninth edition of TAFFNY presents seven award-winning fiction and documentary feature films and more than 30 shorts, celebrating the rich diversity of the stories, languages and cultures of the Americas. Apart from the opening night, all of the screenings are free and open to the public, and foreign language films are subtitled in English. Click here for the full program and showtimes.

A component of TAFFNY is the Americas Short Film Competition that is dedicated to the promotion and exhibition of short audiovisual works by emerging filmmakers that portray the contemporary concerns of filmmakers living in the region. This year, TAFFNY shows 28 short films competing for the Americas Award in the categories of animation, documentary, experimental and fiction.

Special guests, who will all engage in Q&A sessions after their respective films are screened, include:

Juan Carlos Mercado, Dean of CCNY’s Division of Interdisciplinary Studies and TAFFNY’s founder, said of this year’s festival: “In addition to highlighting the importance of presenting films from established filmmakers, we promote new talents with The Americas Award for short films in competition. We would also like to honor the students and faculty of City College’s MFA Program in Film, one of the oldest film schools in the U.S. and the only public institution in New York City to offer a BFA in film.”

Diana Vargas, TAFFNY’s Artistic Director, noted that this year’s films, mostly directed by women, “explore the complexities of their societies, review their past and question social and personal positions on pressing issues such as reproductive rights, sustainability, motherhood and the legacy of ancestral laws.”