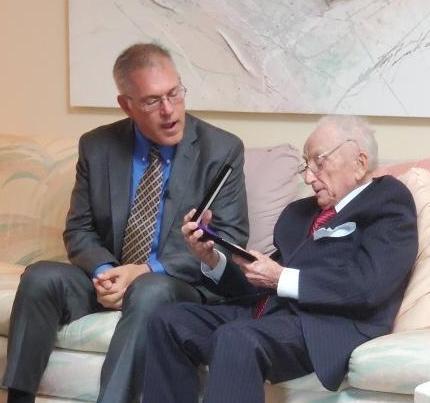 Benjamin B. Ferencz, a former prosecutor at the Nuremberg war crimes trials and an advocate for human rights and the rule of law, is the recipient of The City College President’s Medal from his alma mater. A distinguished member of City College’s Class of 1940, Ferencz received the award from CCNY President Vincent Boudreau.

Ferencz, whose family came to the United States from Romania when he was 10-months-old, attended Harvard Law School after graduating from CCNY. He earned his law degree in 1943 and fought in World War II.

At the end of the war, the young lawyer was recruited for the Nuremberg war crimes trials in Nuremberg, Germany. Once the International Military Tribunal’s prosecution of German Field Marshal, Herman Goering and his henchmen was concluded, the United States tried a broad cross section of Nazi criminals.

Ferencz was involved in this effort, scouring Nazi offices and archives in Berlin with other researchers. They found overwhelming evidence of Nazi genocide by leading Germans in various sectors.

Appointed Chief Prosecutor for the United States in The Einsatzgruppen Case, Ferencz led the pursuit for justice in what the Associated Press called "the biggest murder trial in history." Twenty-two defendants were charged with murdering over a million people. He was only 27 and it was his first case.

All of the defendants were convicted. Thirteen were sentenced to death. The verdict was hailed as a great success for the prosecution. Ferencz' primary objective had been to establish a legal precedent that would encourage a more humane and secure world in the future.

He said of the experience: “Nuremberg taught me that creating a world of tolerance and compassion would be a long and arduous task. And I also learned that if we did not devote ourselves to developing effective world law, the same cruel mentality that made the Holocaust possible might one day destroy the entire human race.”