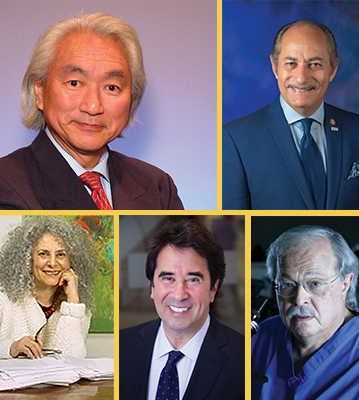 Michio Kaku, the internationally renowned theoretical physicist and co-founder of string theory, is the 2019 recipient of the John H. Finley Award. The award is given out by the Alumni Association of The City College of New York for exemplary and dedicated service to the City of New York.

Kaku is Henry Semat Professor of Theoretical Physics at City College where he’s taught for 45 years.  He’s one of the most recognized figures in science globally, widely featured in science programs on TV and the author of four New York Times bestsellers.

Kaku specializes in two areas. The first is to try to complete Einstein’s dream of a theory of everything which can summarize all physical laws into a single theory. The leading candidate is string theory, and he is the co-founder of string field theory, one of the main branches of string theory. His other goal is to predict the trends which are affecting science in the future, in the area of computers, medicine, space travel, and economics.

Click here for more about Kaku and his science.

•    Michael Baden ’55, one of the foremost medical forensic experts in the world. He’s a former New York City Chief Medical Examiner and the host of the 12-year HBO series “Autopsy.” Baden, who’s performed more than 20,000 autopsies, is also the forensic science contributor for Fox News.

•    Darlene Ehrenberg ’63, renowned psychoanalyst and author. Ehrenberg is in private practice and teaches at several leading institutions including the William Alanson White Institute, New York University’s postdoctoral program in psychoanalysis, the Mitchell Center for Psychoanalysis, and the Institute for Contemporary Psychoanalysis in Los Angeles, California.

•    Allen Hershkowitz ’78, environmental scientist, writer and strategic sustainability advisor. Until 2016, he served as a senior scientist at the Natural Resources Defense Council and was the force behind some of the organization’s most effective and visible initiatives. He is now the environmental science advisor to the New York Yankees. In 2016,  Worth magazine listed him as one of “The 60 Most Powerful People In Sports.”

•    Guillermo Linares ’75, the first Dominican-born politician elected to public office in the United States (in 1991). He served in the New York City Council and was later elected as a member of the New York State Assembly. Linares was nominated to the New York State Higher Education Services Corporation by Gov. Andrew Cuomo and confirmed in May 2019.

Established in July 1853 by the first graduating class of what was then known as The Free Academy, the Alumni Association of The City College of New York is the oldest continuously running alumni association at a public college in the United States.