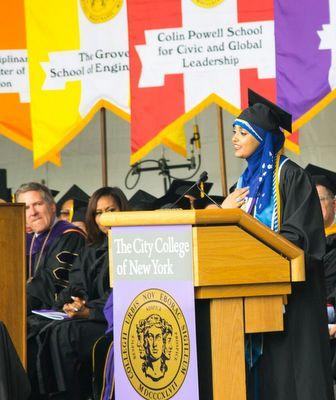 Almansouri joins President Obama, Mrs. Obama, Vice President Joe Biden, Oprah Winfrey, House Democratic Leader Nancy Pelosi and a host of other speakers from all walks of life at the summit, June 14 – 15 in the nation’s capital.

“After delivering her keynote speech, Mrs. Obama embraced me on her way out, telling me how proud she is of me and that she would be in contact” said the Yemeni-born Almansouri. “This week one of her aides invited me to speak at the United State of Women Summit. I am thrilled to hear all the amazing speakers and to speak on the panel, ‘Let Girls Learn.’”

A Carnasie, Brooklyn, resident, Almansouri spoke passionately at commencement on her fight to pursue her education as a woman, countering the tradition for females in her family.

She’s graduated from CCNY with double BA degrees in English and history and a 3.97 GPA.

Almansouri is now an advocate for other young women in her culture to stand up for their rights to an education.