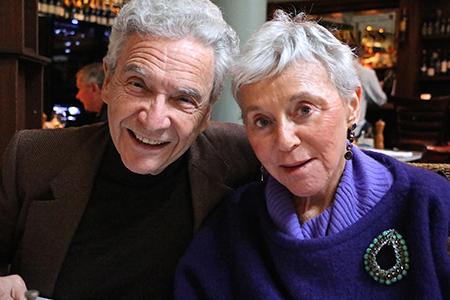 Four Folded Square Alphabet Letters from the Fletcher Benton: The Alphabet series are on permanent display at CCNY. Photo: Dr. Yoel Haller (left) and Eva Haller (right), who gifted the letters to the college.

Four Folded Square Alphabet Letters from the Fletcher Benton: The Alphabet series are on permanent display at The City College of New York’s south campus. Known as one of America’s leading sculptors, the late artist’s style consisted of cutting, folding and realigning two-dimensional sheets of steel into three-dimensional objects that seem to defy gravity.

Haller, a philanthropist, activist and executive, was born in Hungary, and at the age of 12 she joined the Hungarian resistance—creating and distributing anti-Hitler leaflets while hiding with other students at the Scottish Mission. Eventually, she made her way to New York where she earned a Bachelor of Art’s degree from The New School and a master’s degree in social work from Hunter College.

Along with her late husband, Murray Roman, Haller co-founded the Campaign Communications Institute of America, a marketing and research company that revolutionized the use of telemarketing in political campaigns and Fortune 100 companies. She and her second husband, Dr. Haller—founder and president of the Obstetrics and Gynecologic Associates of San Francisco—have been devoted to social, educational and environmental activism and philanthropy. They have supported arts and culture in the Santa Barbara area for decades.

“The college is grateful to the Hallers for this tremendously unique gift to CCNY,” said Dee Dee Mozeleski, vice president of the Office of Institutional Advancement and Communications, executive director of the Foundation for City College and senior advisor to the president. “Benton’s work has often been described as seeming to defy gravity. We are thrilled to celebrate his life and work and to have the new sculptures serve as a welcome for visitors to our campus community for generations to come.”

The Alphabet sculptures trace back to Benton’s childhood in the early 1940s where at the age of 12 he taught himself how to create classic Roman serif alphabet letters with brush strokes. He later opened a sign shop at 14 in Jackson, Ohio and continued making a living into his 30s as a certified union sign-writer.

After a stint in the Navy and obtaining a Bachelor of Fine Arts degree from Miami University, Benton stopped working as a sign-writer and developed his career as an artist becoming a leading figure in the kinetic art movement of the 1960s.

His transition to traditional three-dimensional sculpture involved working with circles, spheres, cylinders, cubes and squares. He decided that alphabet letterforms were the perfect subject to work with, and this would later become the basis for his Folded Square and Folded Circle series.