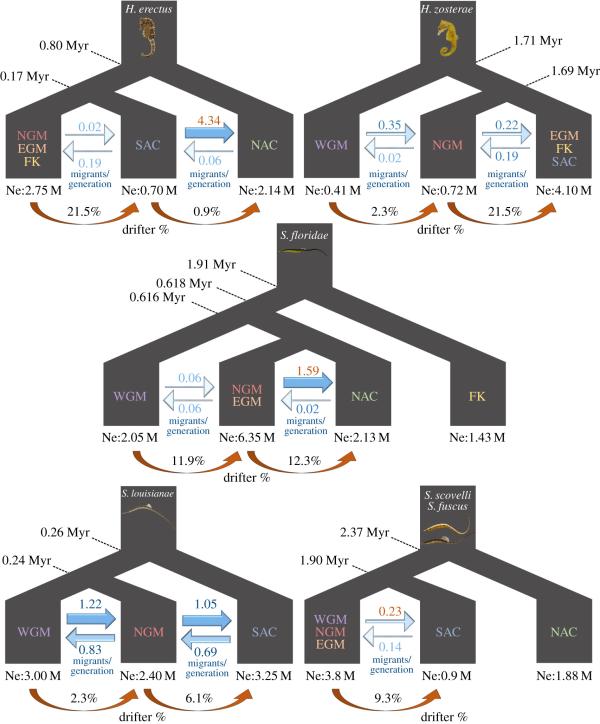 Based on genomic data for each of the species, the researchers built demographic models including information on population size and gene flow.

The direction of ocean currents can determine the direction of gene flow in rafting species, but this depends on species traits that allow for rafting propensity. This is according to a City College of New York study focusing on seahorse and pipefish species. And it could explain how high genetic diversity can contribute to extinction in small populations.

Published in the British-based journal “Proceedings of the Royal Society B,” the paper by City College scientists led by Michael Hickerson and Laura Bertola is entitled: “Asymmetrical gene flow in five co-distributed syngnathids explained by ocean currents and rafting propensity.”

It reveals that ocean circulation driving macro-algal rafting is believed to serve as an important mode of dispersal for many marine organisms. This leads to predictions on population-level genetic connectivity and the directionality of effective dispersal.

“We inferred demographic histories of these co-distributed syngnathid species, and coalescent model-based estimates indicate that gene flow directionality is in agreement with ocean circulation data that predicts eastward and northward macro-algal transport,” said Hickerson. “However, the magnitude to which ocean currents influence this pattern appears strongly dependent on the species-specific traits related to rafting propensity and habitat preferences.”

The study, he said, highlights how the combination of population genomic inference together with ocean circulation data can help explain patterns of population structure and diversity in marine ecosystems.